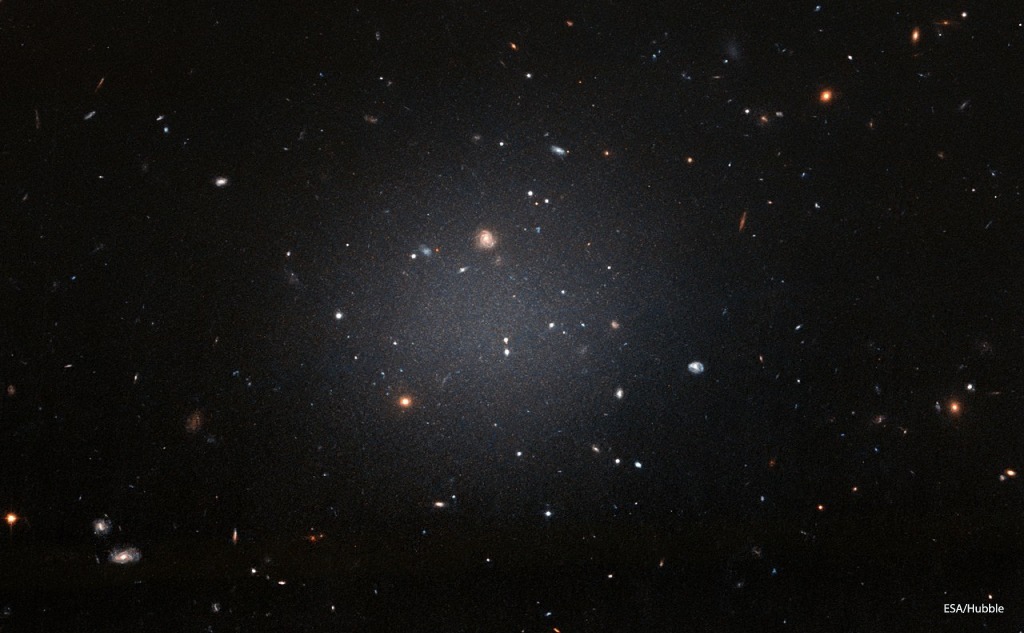 This is about the galaxy Dragonfly 44.

So if you want to learn more about the Dragonfly 44 galaxy, you’re in the right place.

Tucked 70,000 light-years away in the Coma Cluster, Dragonfly 44 has approximately the same mass as our own Milky Way galaxy.

Yet, it contains less than one-hundredth of our star count. But, how can that be?

If this galaxy contains drastically less matter than ours, how could it have the same mass?

Astronomers believe this inconsistency is because Dragonfly 44 is composed of around 99.9% dark matter.

What Is Dark Matter?

The short answer: nobody really knows. But, dark matter is a type of matter that does not interact with the electromagnetic spectrum.

In other words, it does not interact with the matter that our entire worlds and lives are based upon.

Because of this, scientists are not able to directly observe, test, or see dark matter, hence the name.

In fact, we now know that all of the normal matter in our known universe only accounts for less than 5% of its total mass.

That means that all of the stars, planets, galaxies, and everything else you can imagine is only a fraction of the universe.

So, when you look at the night sky, the black space in between stars is not quite as empty as you may think.

How Do We Know Dragonfly 44 Is Made of Dark Matter?

Currently, we are only able to observe dark matter through its impacts on surrounding visible matter.

Astronomers can accurately measure a galaxy’s mass based on the motions of the galaxy’s stars.

Basically, certain levels of mass cause specific speeds and motions of stars.

However, when astronomers observed Dragonfly 44, stars were moving remarkably fast compared to the mass contained in the galaxy.

Actually, their measurements indicated that around one one-hundredth of one percent of Dragonfly 44’s mass was in the form of visible matter, like stars.

They knew something must be causing these puzzling speeds. This was when researchers became convinced that the missing mass must be in the form of dark matter.

Why Is Dragonfly 44 Important?

Unraveling the dark matter mystery is currently at the top of nearly very astronomers’ and physicists’ lists. This invisible matter that accounts for a very large portion of the known universe will be the discovery of the century, no doubt.

Dragonfly 44 is relatively nearby in cosmic terms, allowing it to be observed much easier than distant, ancient galaxies.

Also, if the galaxy truly is composed almost entirely of dark matter then, what better place to study the elusive material?

Finally, with an unusually low surface brightness and sparse star count, Dragonfly 44 allows for clear, uncluttered observation. But, again, this can only help with attempting to understand dark matter.

What Is Next For Dragonfly 44?

Needless to say, the dark matter debacle will not likely be resolved in the very near future. But, Dragonfly 44 will certainly be a nice stepping stone to help with the quest.

This galaxy sits in a group of more than a thousand identified galaxies, known as the Coma Cluster.

Researchers are already seeking and identifying other galaxies in the cluster with similar low brightness to Dragonfly 44.

Perhaps these peculiar entities will be one of the keys to solving modern astronomy’s arguably biggest mystery, dark matter.