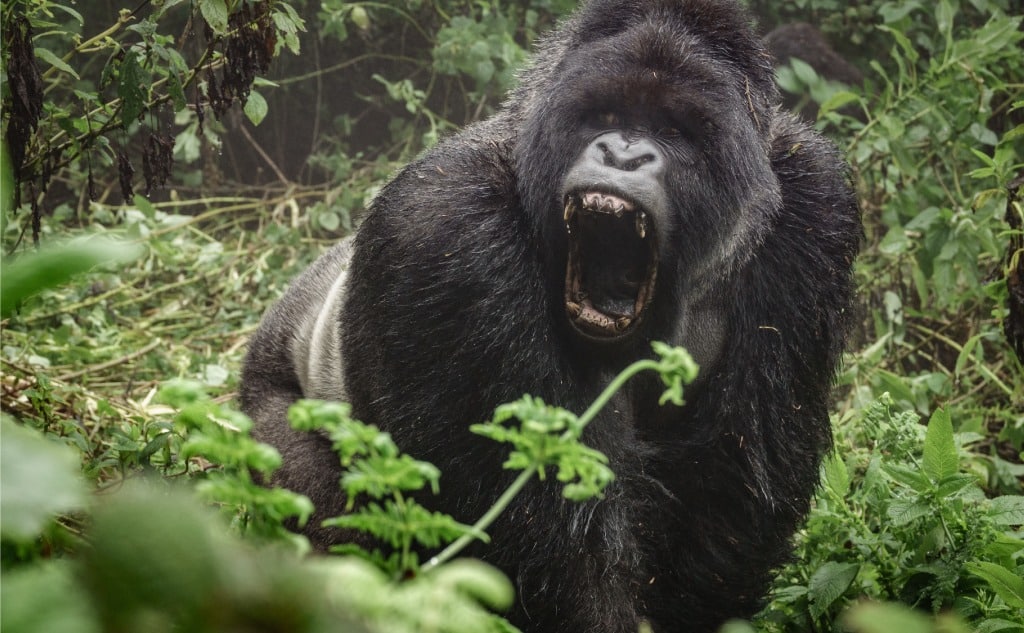 Here’s whether a gorilla or an elephant wins in a fight:

A silverback gorilla can do absolutely nothing to an adult elephant. A gorilla can throw rocks, wield a stick, slap, punch, and  bite, but it will only scratch the elephant.

Elephants are the largest land mammals in the world. Even a handful of gorillas in an organized attack would be unable to defeat an adult one.

If you want to learn all about why an elephant has the upper hand against a gorilla, then this article is for you.

How Can a Gorilla Kill an Adult Elephant?

An adult male gorilla (silverback) can’t defeat a healthy, adult elephant. It may be able to win if the elephant is terminally ill or very young.

A gorilla’s only advantage is its ability to use objects as weapons, but that’s too elementary to threaten elephants. If gorillas don’t find a way to produce mechanized weapons or firearms, there’s no real chance to defeat a healthy adult elephant.

The Skin vs. The Teeth

So, a silverback would be able to penetrate the elephant’s skin if he got close enough to bite.

How and When Do Elephants Fight?

Male elephants mostly fight other males to claim dominance. The testosterone that rises during monsoon season drives the Asian species of elephants to a state known as “musth.” When in musth, male elephants become aggressive, restless, and eager to fight.

Why these elephants become aggressive during monsoon season remains a mystery. Females go into heat throughout the whole year, so that’s probably not reason.

Elephants are more likely to attack humans during monsoon season, as well. Studies show a higher incidence of elephant-related deaths in humans during this period.

While there’s a periodic pattern for the musth phenomenon in Asian elephants, their African counterparts are different. They can go into musth that lasts 1-3 months once, twice, or three times per year, regardless of environmental factors.

The tusks and trunks reach their full potential during musth. Only the African elephants have tusks, and they use them for fighting. They fight with their tusks locked and with the trunks draped over them.

Asian elephants lacking tusks fight by pushing their heads against their opponents. At the same time, they hold their trunks in their mouths to avoid accidentally stepping on them.

An Elephant’s Tusks and Trunk

Anatomically, the trunk is an unusual combination of a nose and upper lip with nostrils at the tip. This large and powerful weapon weighs around 290 lbs (130 kg) and is capable of lifting a 550 lbs (250 kg) load.

Yes, elephants can be aggressive towards other species. It usually happens when they are sick, injured, or harassed. Mother elephants get defensive of their calves.

When an elephant feels threatened, it mainly wants to show its superior strength and social position to its opponent. The angry males stare into the eyes of the threat, spread their ears out, and raise their heads and tusks high.

In severe cases, elephants attack by charging the opponent. Using its tusks, the animal will gore, throw, and crush the victims along with continuous stomping.

Elephants can tear down trees and flip cars. They can run at a 25 mph (40 km/h), so there’s minimal chance of getting away alive.

Gorilla runs at approximately the same speed. It’s also got good endurance. Gorillas are one of the rare animal species that might get past a charging elephant.

What Can Kill an Elephant?

Few animals in the world can kill or seriously harm an elephant. Some of them fight with elephants for food and others for territory. In any case, if the elephant loses, it’s probably because it was too young, too old, or too sick.

The elephant’s natural enemies are:

Inter-species clashes occur most frequently between elephants and rhinos battling for territory, followed by African lions and saltwater crocodiles hunting elephants for food.

A saltwater crocodile can kill and eat a baby elephant on its own. As for the older elephants, it bites their trunks off and waits for them to die of malnutrition.

Are Gorillas or Elephants More Dangerous to Humans?

Every year, elephants kill 100 to 500 people. Sometimes they accidentally gore or step on a human, but sometimes they deliberately raid villages.

Their sheer size and weight are enough to give a lethal blow with only one strike.

Do Gorillas and Elephants Meet in Nature?

Even though gorillas and elephants don’t meet face-to-face in nature, they do share some mutual habitats and play huge roles in their ecosystems.

The Dzanga-Sangha is a protected landscape situated in the Congo Basin in Central Africa.

The area is home to western lowland gorillas and forest elephants. The diversity of tropical rainforest ecosystems makes it possible for both species to coexist among other animals.

The Albertine Rift Valley covers parts of Uganda, Rwanda, Burundi, Tanzania, and the Democratic Republic of the Congo. This is an important ecoregion that transitions from lowland to mountainous forests.

Across this 750-mile (1207 km) valley roam African forest elephants and eastern lowland gorillas. Both subspecies are critically endangered, and this is one of the rare places in the world where they can meet.

How Many Elephant Species Are There?

There are three species of elephants:

Most of their small population is located in the Republic of Congo and Gabon.

Asian elephants are in-between the two African species regarding their size.

The African savannah elephant is the largest of the three species.

How Many Gorilla Species Are There?

There are two species of gorillas in Africa:

Their closest cousins, the western lowland gorillas, are the most widespread of all. Their height and weight are pretty much identical to the Cross River type.

The eastern lowland gorilla is the largest of all of the four subspecies. They have the shortest muzzles.

Mountain gorillas live in Uganda, Rwanda, and the Democratic Republic of the Congo. Their skin is covered with a thicker and more abundant coat to keep them stay warm when the temperatures in the mountains drop.

Comparison of Elephant and Gorilla Attributes

We will compare the two largest representatives of the gorillas and the elephants.