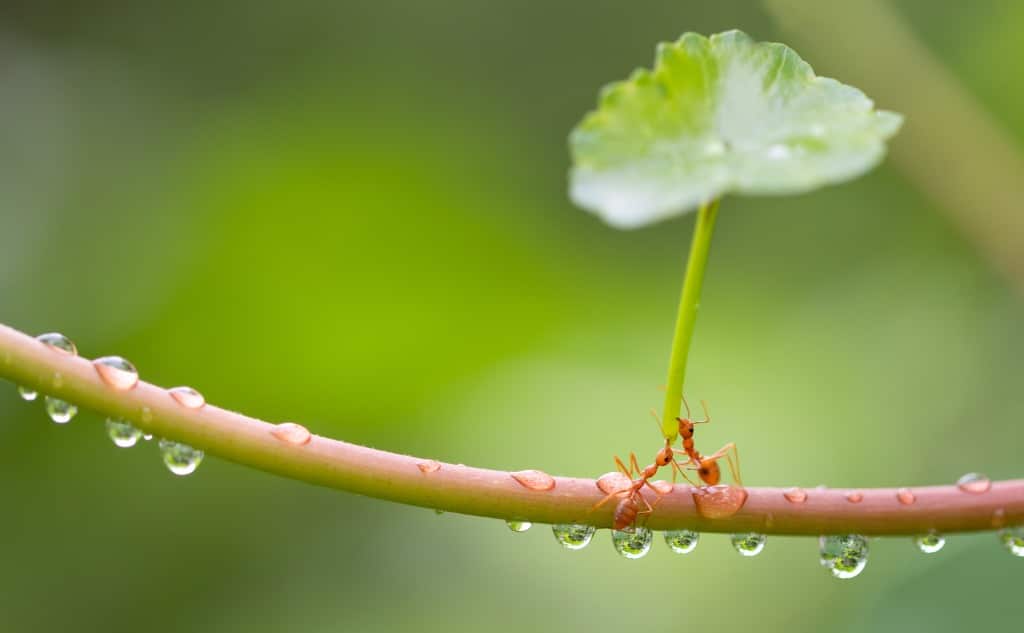 This is why insects come out after a rain.

So if you want to know why insects come out after a rain, then this article is for you.

Insects Come Out After a Rain for Two Reasons

Have you ever wondered why small insects emerge after it rains?

We all have seen a lot of flying insects rise up after a rainstorm only to end up as dinner for frogs and lizards.

But why do so many insects come out?

Are they enjoying a wonderful picnic after the rain?

Or did the rainwater flood and destroyed their homes, and the survivors are seeking shelter?

Or both, or maybe neither.

The reason this swarming happens for each insect is different. Even so, they fall into two main groups:

Why Insects Come Out in Abundance After It Rains

The bottom line is many insects thrive after the rain because they love a hot, humid environment, so they can:

Here’s why insects come out after it rains:

Many types of ants exhibit a behavior when it is time to breed. They develop wings and fly away.

The optimal conditions for these flights of reproduction are:

These conditions often occur right after a summer rain.

Therefore, these young, loving couples come out to breed.

Hundreds of virgin queen ants and males join and fly together after the rain as part of their mating ritual.

After mating, males die due to the explosion of their genitals during sex, and female queens shed their wings and start egg-laying. This type of behavior also happens in many bees and fly species too.

Termites are destructive to wood and paper. Unfortunately, in some countries where they are abundant, the damage can be so common that insurance companies won’t permit you to claim termite damage in their policies.

After a good rain, a large number of flying termites emerge to breed.

The mechanism and cause of their emergence are similar to ants, but there are some differences.

Ants tend to move in areas with bright light. Termites like it shady and wet.

When rain floods their colonies and destroys their homes, they tend to join together and make a raft.

Hundreds and thousands of ants join together and start floating on the water.

They safely move the queen, hatchlings, and eggs to safer places by this behavior.

After it rains, these places usually have a high water load and can flood.

So to avoid drowning, cockroaches show up and enter wherever they find safety, including your kitchen or bathroom.

Rain works for mosquitoes, as spring works for flowering plants. It is the best time to lay eggs because their larvae can only develop in water.

For most mosquitoes, such as the anopheles, their larvae thrive best in stagnant water.

Stagnant water can accumulate on:

However, some species of mosquitoes such as Aedes aegypti like clean and fresh water, such as that found in your plant pots or air conditioner units.

To avoid mosquitoes and the diseases they spread, you should avoid having any kind of water accumulation around your house.

Moreover, you can put some type of natural insecticides, such as cinnamon oil and cinnamon sticks, to kill the mosquito larvae in the plant pots. This approach has been proved to be very effective in research studies.

These long creatures also come out in large numbers after it rains.

Though they reproduce slowly and rain does not affect their reproduction, they act as police officers during the rainy season.

They are predators and eat small insects. And because their prey comes out in abundance after the rain, they come out to hunt them.

Who wants to miss a buffet of the most delicious insects when they are abundant and easily available?

This is an organism with probably the most nicknames of any creature.

Here are just a few:

Whatever you happen to call them, they usually live in damp places because they undergo coetaneous respiration.

Previously, they lived in water and adapted to the terrestrial environment, but some species prefer damp places because their respiratory system requires moisture for the gaseous exchange.

The rainy season provides such an environment.

Ticks and fleas are ectoparasites of pets and other animals. Like mosquitoes, these blood-sucking arachnids pose a serious threat to dogs and cats—and you—especially during the rainy season.

This is because an adult tick or its pupa will only search for a host to suck its blood when it is sure that there would be enough humidity to absorb water from the environment.

Moreover, veterinarians have seen a rise in the cases of tick-related diseases, such as tick fever, during wet weather. Fleas also thrive in humid conditions.

When talking about insects, how can we ignore flies? You may have observed a sudden rise in the number of house flies after it rains. The reason is that they need plenty of water to breed.

This also answers one of the most important questions:

Why do flies hover around our faces?

They do this because of the moisture in our:

So, by coming out to feed, they can survive the bad weather.

As their name suggests, they come out exclusively in response to rain.

The larval stages live underground, but the adults dig their way up to the surface as the soil gets softer after a rain.

Although red velvet mites are arachnids (cousins of insects), they are of prime importance when talking about insects that love rain.

The larvae of red mites are transmitted via other insects, such as grasshoppers. They attach to the insect and are mechanically transported to their host.

So, when the other insects (their vectors) increased in population after it rains, these tiny, velvety, bright red, beautiful arachnids can be found in abundance.

Can you imagine that there is a creature that cannot eat or drink anything? The rain moth is a good example.

They don’t have proper mouthparts and can live only for 24 hours after coming out of their pupa shells in larger numbers after a rain. Their sole purpose is to:

There Are More Insects That Come Out After a Rain

Along with those insects listed above, other insects such as dragonflies and damselflies are also seen in abundance after a rain.