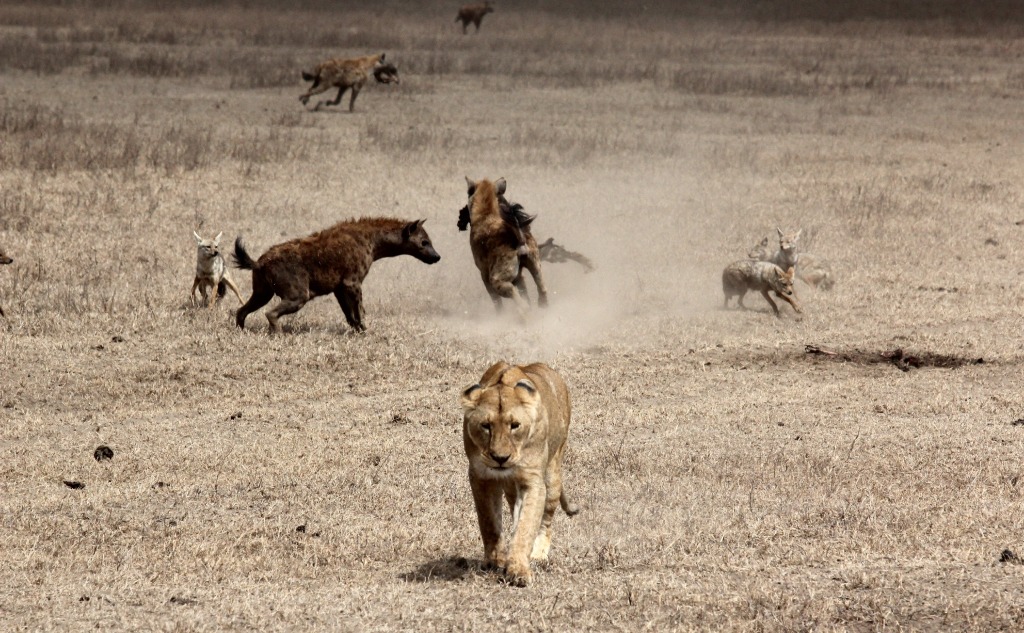 Here’s who would win in a fight between a lion and a hyena.

Because hyenas have neither the speed nor the agility of a tiger nor the size and strength of the elephant, a hyena stands little chance against a lion in a one-on-one duel.

However,a fight between a group of lions and hyenas has an uncertain outcome. One in Ethiopia resulted in the death of 35 hyenas and 6 lions.

If you want to learn all about who woud win in a fight between a lion and a hyena, then you’re in the right place.

Who Would Win a Fight Between a Lion and a Hyena?

Animals use aggression as a means of communication.

Several factors are responsible for aggressive interactions among animal species, the two most important are territory and food.

The traditional rule in the wild is “survival of the fittest,” and all animals use any possible means to win the battle for life.

This necessity results in violent clashes, which may involve the death of one of the combatants.

The epic struggle for survival is being waged continuously in all ecosystems around the world.

Who Are the Natural Rivals of Lions?

Apex predators are at the top of the food chain and do not have natural predators in their environment.

Do lions, generally considered as the kings of the jungle, actually face competition? The answer is: Yes.

There are a number of animals in the natural world that could be considered self-styled kings in their own right. These include:

Some of them may not be direct competitors of lions, but they are still strong rivals.

Who Are the Two Main Rivals in the African Savannah of a Lion?

Have you ever seen a rebellious and ferocious animal battling the “king of the jungle” for dominance?

This can be a routine occurrence throughout the African savannah ecosystem; that is, the great lion is challenged constantly by hyenas.

But, before we dig deep into their hostility, let’s get a brief introduction to these two main rivals.

Who Are the Hyenas?

Imagine the most intelligent and successful hunters in Africa. You are probably thinking of lions… right? No. Believe it or not, this honor goes to the hyenas.

These odd-looking animals are perhaps the most ignored and little-known competitors to the big African cats. They are also the most common carnivores in all of Africa.

Here are some important facts about these amazing animals:

Who Are the Lions?

Who doesn’t know lions? Lions (Panthera leo) are the traditional ‘kings’ of the savannah ecosystem.

Various subspecies are known, but we will only discuss the African lions here. They are master hunters and perhaps the most powerful of the large cats.

Sexual dimorphism is distinct, and males are comparatively larger than females.

Males have a majestic mane on their necks. Due to their unique lifestyle and ability to hunt almost every animal, they have been styled in human lore as the “kings of the jungle.”

Is There a Rivalry Between Lions and Hyenas?

So we need to unpack the facts about these two formidable rivals. The question becomes, who really is the master of the savannah: the lion or the hyenas?

Below we will discuss how the two rivals stack up against each other.

Who Is the Better Hunter: Lion or Hyena?

Who are better hunters among these rivals? You might be surprised by the answer because it’s the hyenas.

They are more successful hunters than the fabled lions. Their hunting success rate in groups can be as high as 74%, while the success rate of lions hardly exceeds 30%.

What Causes the Rivalry Between Lions and Hyenas?

These two animals usually compete for common resources, such as food and space. The rivalry between the lions and hyenas is related to the fact that both hunt almost the same animals.

Although the hyenas are better known as scavengers, they are also competent hunters.

Therefore, the hyenas can become a nuisance for the lions when they interfere with hunting attacks or steal the lion’s kill.

How Dangerous Are Hyenas?

The hyenas possess several dangerous behaviors which can frighten even the fearless lions.

Are Lions Fearful of Hyenas?

What makes a lion fearful of these much smaller animals? Other animals also fear hyenas.

What strikes such fear in so many animals, including lions, is that hyenas almost always fight in groups.

In a group attack, they outnumber a lion by a heavy margin and can tear it to pieces.

What makes it worse is noticing a single hyena is a sure sign that there are probably many more in the vicinity.

What is even more frustrating for a lion is that hyenas can usually withstand an attack by a lion.

However, hyenas are highly aggressive when it comes to defending their territories.

A single big cat, such as a lion, can easily be killed if it is unfortunate to walk straight into their territory.

A hyena’s effectiveness is also enhanced by the communication between clan members, which helps them make a coordinated attack.

Can a Hyena Kill a Lion?

Now let’s imagine a duel between a hyena and a lion. Both have strong claims to the throne.

Who would win such a fight?

The lion (and even lioness) will not lose to an animal half of its size. Right?

Because hyenas have neither the speed nor the agility of a tiger nor the size and strength of the elephant, a hyena stands little chance against a lion in a one-on-one duel.

The lion often emerges victorious in such an encounter.

The supremely powerful built and aerodynamically balanced moves of the lion are more than a hyena can match.

In such fights, the lion usually bites the neck of a hyena and suffocates it to death.

Is a Fight Between a Lion and a Hyena One-Sided?

The fight between a lion and a hyena is far from one-sided.

The jaws of hyenas are quite strong, and they are perfectly capable of killing a lion and breaking its bones.

Even a victorious lion will have sustained acute injuries during any duel between these two rivals.

A single mistake by the lion can spell the end of everything for him. And if a young, strong hyena faces an injured, old, or very young lion, it will probably win.

The hyenas increase their chances of success by attacking in groups.

For example, the hyenas swarm around the lion in a group and rip it apart by attacking from multiple directions.

A Pack of Hyenas vs. a Pride of Lions: Who Would Win in a Fight?

Since we have assessed reasonable outcomes of a one-on-one duel, one may find it interesting to assume that a battle between their respective groups has an even more uncertain outcome.

What is for certain is such a battle can have dangerous outcomes for both groups.

For example, a savage battle that ensued between the two groups in Ethiopia reportedly resulted in the death of 35 hyenas and six lions.

The battle was savage and fought valiantly by both groups.

The dead ones were mostly those who were isolated from their companions.

It had the appearance of a real battle between two medieval armies, with both unwilling to give the ground.

Why Are Hyenas Not the “Kings of the Jungle?”

Now that we know how these two rivals stack up against one another, it begs the question about who is the rightful king of the jungle?

The answer is still the lion. Why?

While a tiger or mountain lion may be compared to African lions for kingship in their respective habitats, no one will probably ever mention the hyenas.

Let’s have a look at the reasons why.

It is often said that the hyenas could have been considered for the title of the king if they were not so ugly and seemingly clumsy. Their walk is not as dominant as a lion’s.

The grace, majesty, and exceptional beauty of the lions make them the ideal kings. Despite their hunting ability and strength, the hyenas are not as eye-catching as a lion.

Their hunting habits hardly help them in their bid for the kingship.

They are scavengers and usually prefer not to hunt if some leftover from some other animal’s kill is available.

This is in sharp contrast to the lions who prefer to kill and eat.

A hyena’s hunting behavior is more like hit and run, isolating the weakest ones and killing them in groups.

Although the lions also do so when confronted with elephants and hippos, they still prefer to chase their prey and capture them.

The hyenas are social animals and prefer to live in groups called clans.

After the death of a prominent female, her eldest daughter will inherit the position. Seems so ordinary? Yes.

Just compare it to a lion’s pride.

A young male lion is forced to leave the pride of his birth, struggle for survival, and to fight his way into kingship.

All the weak and inappropriate candidates are killed off at the lower stages.

As a result, many young males never reach the position of being head of a pride of their own.

Despite their strength, the voice of a hyena is nothing more than the bark of a feeble jackal.

It barely compares to the mighty roar of a lion that can be heard almost 5 miles (8 km.) away.

In the end, we can conclude that, albeit being strong predators and group hunters, the hyenas are ranked below lions.

Although a group of hyenas is a lethal killing machine, a pride of lions is equally up to the task, if not more so.

The position of a lion as “King of the Jungle” remains unchallenged by hyenas.