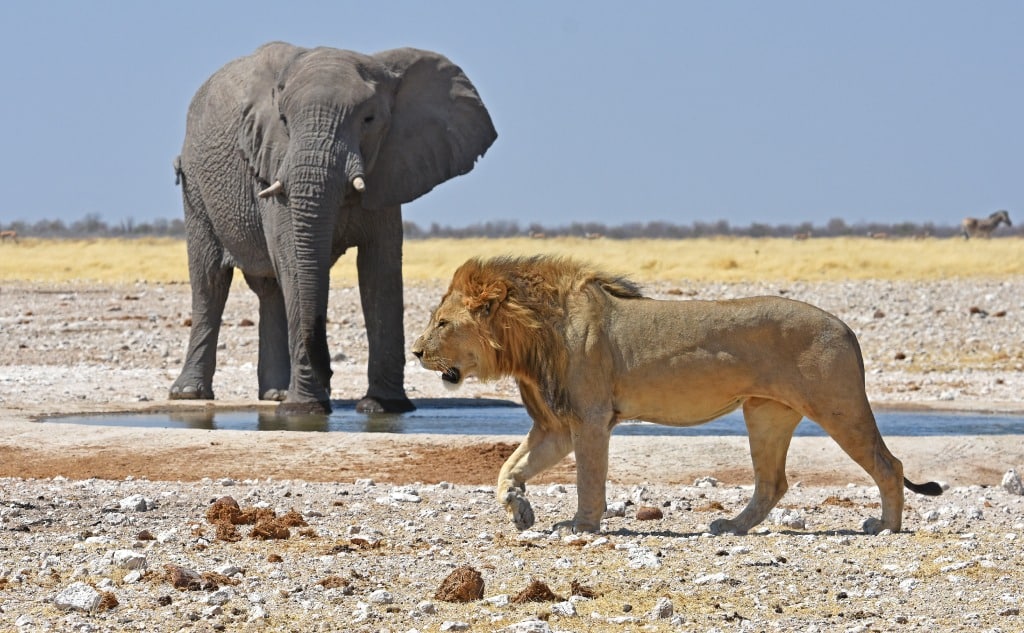 This is whether lions hunt elephants.

So if you want to know all the details about why and how lions hunt elephants, then you’re in the right place.

That is a good question because elephants are so much bigger than lions. Yet, lions hunt in packs, so if it’s a team effort, maybe they could?

The elephant is a match for the lion. Whoever declared lions are kings never considered elephants.

Yet, lions can and do, at times, hunt elephants. So, despite elephants’ strength and physical power, the lions retain their pride as apex predators.

Moreover, their cleverness and vigor sometimes allow them to outwit the largest and most powerful land mammal.

Let’s find out everything there is to know!

Although they are victims of trophy hunting by humans, their traditional status as “King of Jungle” is reserved throughout history in almost all world cultures.

The predatory behavior of these big cats is quite fascinating. Their hunger and instincts cause them to pray on most animal species where they live, including deer, zebras, giraffes, hippos, crocodiles, wild hogs, antelopes, buffaloes, rhinos, and wildebeests. They may even assert themselves to hunt smaller animals, such as birds, hares, mice, tortoises, and so forth.

But not all the victims are small and weak. Some offer fierce resistance. The lion must rely on its shrewdness and strategy to deal with some of the more willful creatures.

The battles with some animals, such as elephants, hippos, and buffaloes, can have uncertain results, often resulting in the defeat of the lion.

Let’s explore the battle between the lion and its closest rival to the title of king—the elephant.

Perhaps the most difficult animal to hunt for the lion is the elephant. Elephants are by far the largest animals walking on the surface of the earth today.

They are also victims of illegal pouching, leading them to become classified as endangered. Because of human greed, the worldwide elephant population is rapidly declining.

Even so, their physical power and vigor have never been questioned. As a result, there are just a few species and subspecies of elephants. The largest of all of these, the African bush elephant (Loxodonta africana), is about 10-13 ft. (3-4 m) long and weighs about 9 tons (8,000 kg.).

Their physical features are quite majestic. Their huge size and weight, coupled with their ferious tusks and pointed teeth, make them a perfect killer.

Although that is not as agile as a lion, they can compensate for this deficiency by forming a solid wall of protection by gathering into their social group.

Before the era of tanks and artillery, elephants were widely used as weapons on the battlefield. For example, the Mughal army relied on a massive arsenal of battle elephants for their conquests.

Are these physical features enough to deter the lion, a highly revered king of the jungle, from killing a giant elephant? Unfortunately, the answer is “No.” Nevertheless, the elephant versus lion duels does happen, such as in the Savuti region of Botswana.

The lions are the only non-human species strong enough to take down an elephant. However, the males being 50% larger than the females are more dangerous for the elephants.

Only two males are needed to kill an elephant, while it takes seven females to hunt one down. A single adult male lion can kill a young elephant.

The answer is the same as the question of why the lions hunt? Obviously, the reason is “food.”

The massive size of an elephant is a tempting feature for the lions. The huge animal can provide thousands of pounds/kilograms of meat to a lion. Thus, this pride has sufficient motivation for them to hunt them.

While one deer is enough to feed a single lion, even a young elephant would suffice for the entire pride. The younger elephants are often better targets for lions. They are smaller, slower, and not as strong as adults. Yet, killing them is not that easy.

Typically, the group of elephants will surround their young ones in case of danger from lions. The lions are very opportunistic. While lions usually avoid an elephant, if the pride is hungry and a sub-adult or injured elephant comes in their way, they might charge at it.

The social organization found within their prides gives them an additional advantage against a small or weakened elephant.

How Lions Can Hunt Elephants?

Although the lions often emerge triumphantly in most of the battles, this battle with elephants is far from being one-sided.

Given that elephants are much larger and heavier than a lion, they can kill a lion easily. However, being one of the most intelligent creatures on the earth, they can adapt to situations accordingly.

The only weapons lions have are their speed, maneuverability, and strong teeth. But, unfortunately, they can’t withstand the weight and sheer raw power of an elephant.

An elephant can use its feet and tusks as a weapon. If the lions survive such a battle without being injured, they still exerted themselves to the point they can’t hunt much of anything else until they’ve rested.

What Would a Battle Between a Lion and Elephant Look Like?

Lions are the ultimate predators possessing many remarkable features which qualify them to hunt down almost any animal. Here are some characteristics of lions that make a difference:

However, in a battle with an adult elephant, the lion has a good chance of being defeated. The chances are considerably improved by hunting with their pride. The strategies employed by the lions to hunt an elephant are:

Although a formidable hunter in its own right, it is difficult, if not impossible, for a single lion to kill an elephant. Their chances improve if hunting with the pride’s help. This combined and multipronged attack approach avoids the possibility of a focused defense by the victim.

Lions Hunt in the Dark

Darkness allows lions to mount stealthy attacks on their prey from many directions. It can also allow lions to attack their victims at point-blank range.

Lions Attack From Behind

Although not very chivalrous for a king to attack from behind, the lions don’t hesitate to do whenever is needed to get the kill.

The frontal attack could be lethal for a lion because it can become an easy target of the elephant’s tusk and teeth which can easily harm it.

The elephant’s dry, hard, and thick skin makes it difficult for the lion to puncture it. So the lion makes repeated attacks at various points to search for some weak point or break on the skin.

Once the skin is punctured, the fate of the elephant is sealed.

Lions Attack the Youngest and Most Vulnerable

As the older elephants are more familiar with anti-lion tactics, the lions prefer to attack the younger animals of the group.