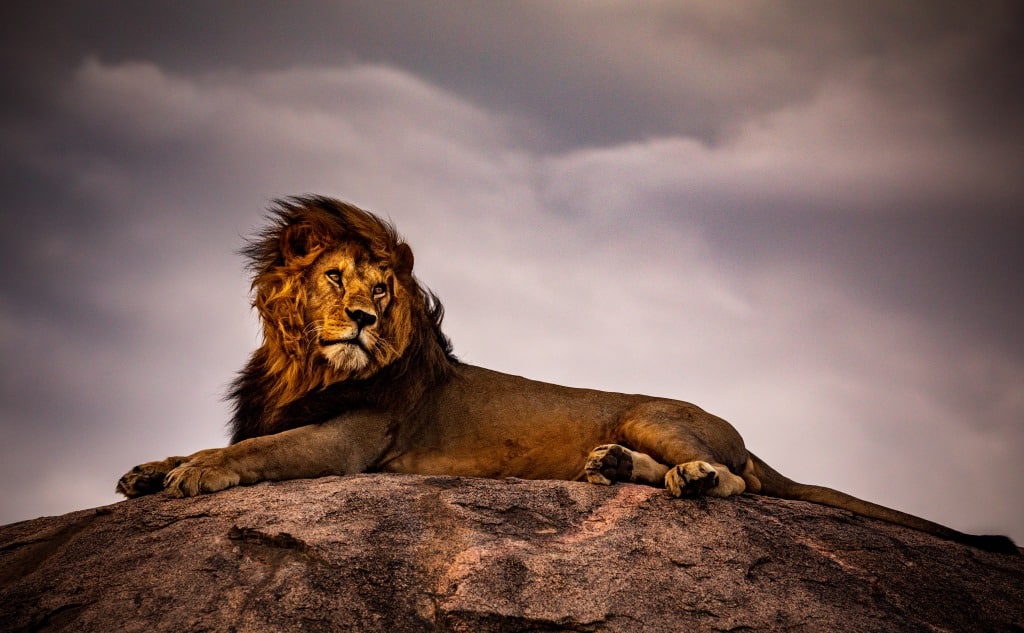 This is why lions are called the King of the Jungle.

So if you want to know why lions are called the King of the Jungle nonetheless, then you’re in the right place.

Lions: The King of the Jungle?

Their terrifying roars (which can be heard almost 5 miles or 8 km away), confident gait, well-muscled body, and bravery qualify the lion to be the King of the Jungle even though it doesn’t actually live in the jungle.

A lion’s preferred habitat are:

These types of open environments allow them to find their chief prey:

Sometimes they will attack larger animals such as:

Their proverbial status as “King of Jungle” was bestowed thousands of years ago and continues to be an important element in human culture and history.

Their historical homeland once covering much of Eurasia and Africa. They are now mostly confined to central Africa, south of the Sahara.

The behavior of lions depends on their mood. The most important times for their hunting activities are dawn and dusk but can vary according to the prey.

So How Did Lions Get This Moniker?

Here’s why lions are called the King of the Jungle:

Does it rule by its physical power?

It is also not the fastest animal in the jungle. That honor belongs to the cheetah. Nor does its terrifying face or body shape earn it that title.

Then what entitles it to rule?

The lions are rulers because of their:

The lifestyle of a lion also resembles that of kings:

A lion can sleep as much as 20 hours a day. Their eating, drinking, and walking habits resemble a king’s.

Other princely features of lions can be summed up as:

Defense of Their Kingdom

Their female partners are responsible for hunting prey and feeding the pride (like royal ministers and administrators).

Male lions themselves are responsible for the defense of the pride and its territories.

Young male lions are forced to leave their parent’s pride around the age of 2-3 years.

They travel hundreds of miles in hostile territories to find and conquer their own prides.

They have to engage and defeat the current owner of the pride they chose to conquer. This is perhaps the most princely feature of a lion’s behavior.

Upon taking over the charge of new pride, the first action as king is to murder all his potential rivals to the throne (male cubs of the previous pride leader).

Then, they reproduce with lionesses to produce their own heirs.

Find Any Resemblance of These Behaviors in History?

Historically, many human societies had a fratricide law, which entitled the new king, emperor, or sultan to murder his brothers and nephews to remove any potential challengers to his absolute power.

Probably the most famous one was the Ottoman Fratricide Law.

Some societies even permitted the killing of female relatives if she tried to save her male relatives. This also runs true within a pride of lions.

Lions vigorously defend their pride, cubs, and females. The roars you hear at night are actually warning other lions that they will pay the price if they dare enter their territory.

The male lion enjoys the most prestige and respect within the pride because the very existence of the pride is endowed to him.

They are offered food first of all. For the first year or so, cubs are solely dependent on the ability and ferocity of their father to defend them.

The primary male lion keeps the balance and maintains the social equilibrium of their societies.

They will not shirk killing an intruder or a threatening member of the pride so they can retain their throne and keep peace in their “kingdom.”

This includes killing prey, like antelope, to prevent overcrowding or disease from destroying the balance of power.

How Do Lions Stack Up Against Other Contenders?

Let’s look at some more intriguing qualifications of the lions because there are other candidates for the kingship, too.

Why does literature only mention lions?

The closest rival to lions for the kingdom of the jungle are tigers.

Both are powerful beasts, but in one-on-one combat, the tiger has many advantages, such as its massive front paws, its ability to stand on the hind legs, and also the ability to fight with its front legs.

So, the lion resorts to other advantages to maintain its hegemony.

The king is not necessarily the strongest with his kingdom but will use all available means to retain claim to the throne.

Lion maintains its kingdom by using its pride (group). Since the tigers are solitary hunters, they don’t have a chance against the full might of a ferocious pride under the leadership of their king.

Lions have the same advantages over elephants that tigers have on lions.

The lion uses its army (its pride) to take on the largest and strongest mammal on the planet—the elephant.

The lion’s maneuverability, speed, and combat strategy, coupled with its tirelessness, are the traits hard to match for an elephant.

I can understand how shameful will it be for an elephant to lose against an animal almost a tenth of its size. Still, the reality is size doesn’t matter. Group strength and stratagem do.

Despite their sharp mind, maneuverability, dignified habits, formidable look, wolves also have no chance in a battle for the throne.

The wolf is a fearsome warrior but lacks the lucidity and sagacity of the lion. Wolves function more like a military commander as compared to a ruler.

The attitude of lions is quite royal and majestic. It maintains its special position in the community of animals through its cunning and strength.