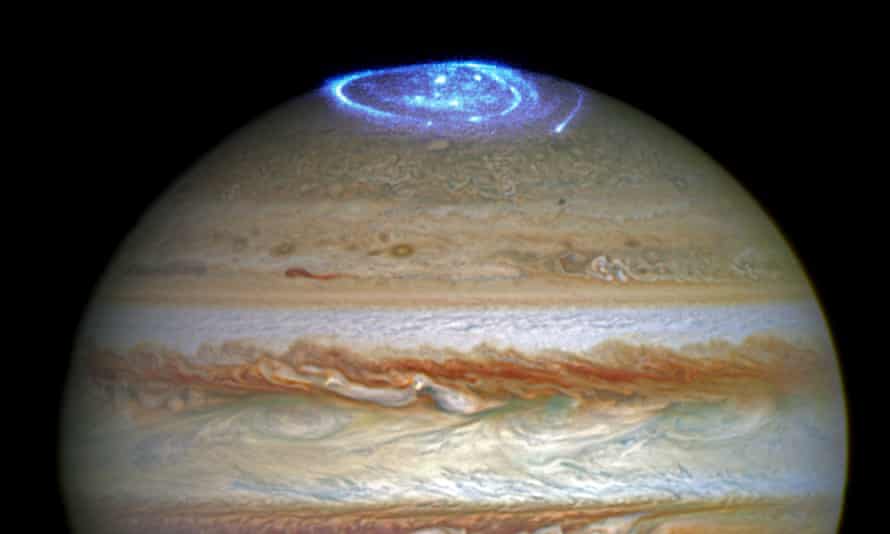 This is about how it would be to live on the planet Jupiter.

So if you want to know how life on Saturn might be, this article is for you.

What Would It Be Like To Live on Jupiter?

Well, it is a gigantic ball of gas, and therefore has no solid surface to live on.

But, for now, let’s ignore that and journey past the inner, rocky planets to explore your new home, Jupiter.

Jupiter, in Roman mythology, was the god of all gods.

Jupiter, among planets, assumes this same role. This gas giant is the largest planet in our solar system, out-sized only by our enormous Sun.

Actually, it is so large that it would have been another Sun if it were only 80 times bigger.

Currently accepted theory even states that Jupiter likely played a key role in the formation of our entire solar system.

Without further ado, let’s assume all necessary technology is in place to protect from harm and see what it would be like to live on Jupiter.

You now officially live in the outer solar system, with your new home just under 500 million miles away from planet Earth.

Out here, things start getting really weird and spooky.

We have already visited the inner rocky planets, like Venus, Mercury, and Mars were dangerous enough.

But, the outer solar system is an entirely new arena of dangers.

Picking out the region in which you’ll now receive your mail will be most important. Let’s go over the options.

Here is a video from NASA to hear the actual sound of Juno entering Jupiter’s eerie magnetic field:

Remember the metallic hydrogen ocean inside of Jupiter?

Yeah, that metal is now a super-conductor for these particles.

Even still, you will need very sophisticated protection against this strong field and its radiant properties.

According to a study using data from the Voyager and Galileo missions, Jupiter’s moon Io’s volcano clusters are offset hundreds of miles eastward of where they were predicted to be. (NASA/JPL)

Your Typical Day on Jupiter

Having a bad day?

The good news is that your new day living on Jupiter only lasts five hours.

So, you’ll only have to wait for 20% as long for the next episode of The Walking Dead to air.

Jupiter is the biggest and fastest-spinning planet in our solar system.

Kind of like an NFL lineman running a 4-second 40-yard-dash. The planet rotates once every 10 hours.

Jupiter’s gravity is immense, nearly three times that of Earth. So, productivity will be a concern.

The amount of sluggish activity you will fit in a five-hour day will be very little.

You will want your office, your favorite restaurants, and your gym nearby.

Between your sloth-like movement and your planet being almost 300,000 miles around, getting from point A to B will not be quick.

However, living on Jupiter does have some perks. For instance, every two weeks, you can watch the Juno spacecraft fly by as it orbits.

Nostalgically, this will be the new version of what the International Space Station was on Earth.

Plus, depending on your selected location, you could get a close-up view of three faint rings (above).

Yes, your new home has a ring system. They are very sparse, nothing like Saturn’s famous rings.

Telescopes from Earth never see these, so this might be a nice treat.

Your Typical Night on Jupiter

Nighttime on Jupiter will be similar to your day; brief. Only lasting for a short five hours, you will want to maximize sleep.

But, if you do want to stay up, there are some sights to see.

Do you ever stay up late on Earth to see the Moon on a summer night?

But, at over 3,000 miles wide, Ganymede is 8% larger than planet Mercury, so it should be easily viewed.

Actually, Ganymede, alongside Io, Callisto and Europa, is one of four Galilean Moons.

Discovered in 1610 by famous astronomer Galileo Galilei, these Moons were the first known object to orbit another planet.

So, you will be front row for some of astronomy’s most epic history.

Finally, if you venture up North, you can see the biggest auroras in the solar system. They are bigger than the entire planet Earth and are the main focus of Juno’s mission.

Despite their incredibly dangerous radiation and electricity, they would put our northern lights to shame.

Your Typical Year on Jupiter

In contrast to your brief days and night, your new home’s calendar year lasts 4,333 Earth days. That is nearly twelve times your normal Earth year.

Because of this long year, if you left Earth in your 30s, you are just now fighting your way through the “Terrible Two’s” on Jupiter. Also, with your nagging new gravity, your weight will spike … a lot.

In other words, if you left Earth a fit 150 pounds, you now weigh in at 350 pounds. If you could leap 20 inches high on Earth, you sadly only have eight inches of “ups” now.

Finally, if you were proudly bench-pressing 200 pounds on Earth, you are now putting up 80 pounds.

Maybe you can open up a new Jovian gym called 10 Hour Fitness?

Bottom line: you are now a slow, overweight two-year-old with a pathetic vertical, putting up disgraceful numbers in the gym.

So, you might want to put healthy snacks, not far away, on the lowest possible shelves.

Living on Jupiter near the cloud tops, the temperature will be a brisk -240º Fahrenheit, and you will want a very warm coat.

Your night and day temperatures will be mostly identical since the Sun does not affect your temperatures. It is the thermal processes of your planet’s insides that dictate your forecast.

Should you venture inward, the temperatures may rise to around 43,000º, so bring sunscreen.

Also, you will want to bring your liquid metallic hydrogen boots to cross the 25,000-mile-ocean. Just saying.

Visiting the southern hemisphere is not advised. The Great Red Spot is a storm that has waged on for at least 350 years. This storm is large enough to fit three Earths inside.

The storm has a calm “eye” like a hurricane, but winds in its outer areas can reach almost 450 miles per hour.

Your atmosphere has giant bolts of lightning, thousands of miles long and much brighter than Earth’s.

Your atmosphere’s methane molecules are struck by lightning, turning them into large quantities of carbon. As it falls, the carbon cools, hardens, and turns into diamonds.

So, rainstorms will look like Hollywood’s red carpet now.

These diamond “hailstones” are often large enough to damage your house. But, since each hailstone is worth thousands of dollars, covering the real-estate damage costs should not be difficult.

Are you interested in a floating home with 67 full Moons, five-hour days, and four thousand day years?

Do you wish you were far slower, much heavier, and could lift the only meager weight?

Do you find yourself longing to retire and move to a liquid-metallic-hydrogen-ocean-front property?

Then, Jupiter is the place for you.

However, humans have trouble withstanding pressures ten feet deep in a swimming pool.

So, before you jet off to become Juno’s new roommate, you might want to reconsider.

Your new atmosphere is made almost completely of hydrogen and helium gases, just like our Sun.

The surface of your new home planet is covered in wildly thick clouds. They are so thick that NASA’s Juno spacecraft is currently orbiting Jupiter, specifically to try to see through the clouds.

You will essentially need a home that can float atop these dense clouds.

Living Inside of Jupiter?

You are welcome to try, but research tells us that beyond the clouds lies a 25,000-mile-deep ocean of liquid metallic hydrogen.

Quick reference: hydrogen only acts like a liquid or metal under extreme, dense conditions.

In fact, scientists have only been able to produce these conditions for fractions of seconds on Earth.

Not to mention, as a metal, hydrogen now acts as an electrical conductor, which we will discuss below. Bottom line: don’t be a hero.

Stick to the surface.

Regardless of where you are living on Jupiter, your concern is radiation.

Jupiter is surrounded by a vast magnetic field, extending out for millions of miles.

All of the charged-up particles floating around the gas giant zip chaotically around this magnetic field, like one big circuit.

However, the radiation is known to be the worst around the equator. So, northern and southern regions may win out.