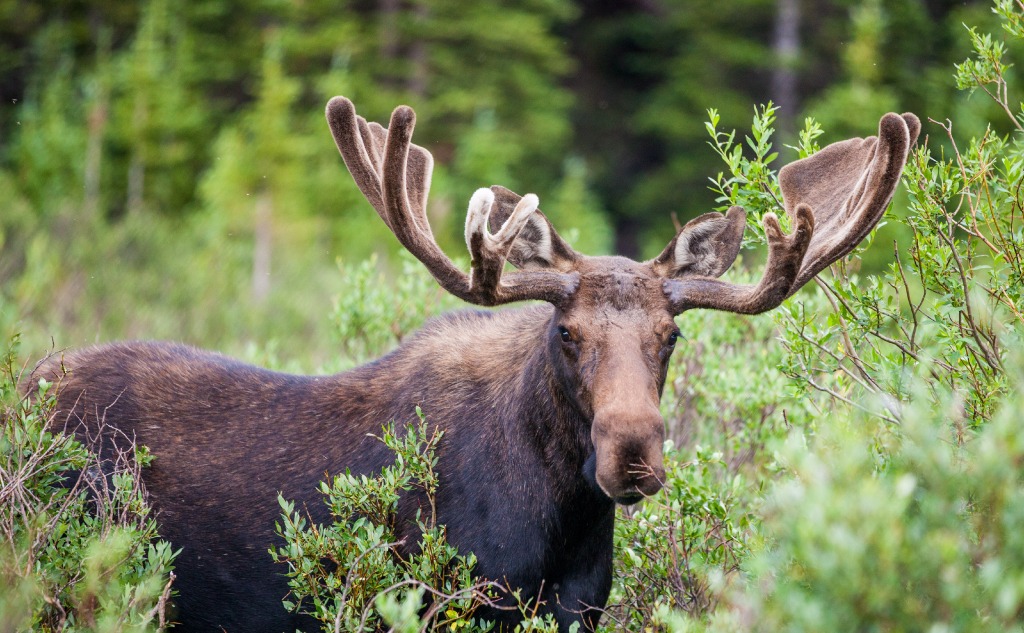 Here’s whether the orca or so-called killer whale is a natural predator of the moose:

Orcas occasionally eat moose. While both animals live in different habitats, there is a predator-prey relationship. There’s no evidence that killer whales eat moose regularly, but they do sometimes.

So if you want to learn all about orcas preying on moose, then you’re in the right place.

Is the Orca a Natural Predator of the Moose?

Orcas occasionally feed on moose. Both animals occupy different habitats, but a predator-prey relationship does exist. There isn’t any documented evidence to suggest that killer whales eat moose regularly, but they do eat them occasionally.

One theory suggests that Orcas feed only on the carcasses of dead moose that they find in the water, but there are other possibilities.

Another theory suggests that orcas feed on moose opportunistically, which means that they grab them when random chance brings them within reach but don’t actively hunt them.

Killer whales are widely distributed and live in most oceans and seas. They can adapt to all types of climates. Moose, on the other hand, can be found only in the forests of the Northern Hemisphere.

Where Do Orca Whales Attack Moose?

Orca killer whales attack moose off the coast of Canada and Alaska. While the moose swims between many of the islands looking for food, they end up becoming the food of the orca.

A few moose carcasses have been found off the coast of Vancouver, Canada with lacerations over their bodies consistent with orca bites. The obvious conclusion is that they were killed by orcas.

Moose are agile swimmers, but the water isn’t their natural habitat. They cannot evade Orca attacks, especially not a whole group of them. The persistency of orca hunting strategy eventually proves fatal to nearly any animal they decide to kill.

The name “killer whale” can be misleading. Orcas are a species of dolphin. The reason they are called “killer whales” is that ancient sailors observed how they would prey on large whales.

Their first moniker of “whale killer” somehow changed to a “killer whale.” They are also called orcas.

Let’s be honest, though, they do love to kill.

In the ocean, orcas are among the few apex, or top, predators. Orcas hunt other animals, but no other animal hunts an Orca. That’s what being an apex predator means.

Killer whales feed on more than 140 species of fish and other marine mammals. They can kill almost anything that crosses their path because they are quite large, agile, and intelligent.

The intelligence of Orca whales is compared to that of chimpanzees. For example, chimpanzees can be taught to use sign language or other forms of communication using symbols or tokens.

Do Moose Attack Other Beings in Nature?

Moose mothers are very protective of their young ones. If they see other animals and humans approaching, they can charge full speed.

During mating season, the male moose, called “bulls,” are especially aggressive and can attack people and cars.

Moose run at a maximum speed of 35 miles per hour (56 kilometers per hour). With their massive body weight and giant antlers, they can cause severe damage to a target.

The conventionally peaceful moose can become aggressive when feeling threatened. It’s never a good idea to approach a moose because they are territorial and protective of what they consider to be their property.

Approximately 10 people are injured by moose in Alaska every year.

Moose are considered to be more dangerous than bears. The danger isn’t in terms of behavior, though; it’s because of their vast population.

How can a terrestrial mammal of that size and species swim? The reason lies in the structure of moose hair. Their hair is hollow.

But what business does a moose have in the water? Food, of course. Moose can dive as deep as 20 feet (6 meters) in search and forage of aquatic vegetation.

They go deep into the water, especially during late summer when there is a shortage of quality food on land. Coldwater also cools them off during hot weather.

When there isn’t a natural water source near them, moose can even decide to go into people’s backyards and use their swimming pools for cooling.

Even though they live in the northern parts of the United States and most of Canada, their bodies don’t tolerate rising temperatures well. So, even 60° Fahrenheit (16° Celsius) is more than they can take.

In Europe, moose are called elk. Their Eurasian cousins inhabit the forests in the north of Europe and Asia.

How Do Orcas Hunt?

Orcas can come near the shore and grab unsuspecting prey from the beach. It’s mostly sea lions they are after. When they work in squads, one orca will charge the victim while the others flank it to prevent escape.

No one has ever seen an Orca whale injure itself after beaching, despite the risks associated with the maneuver.

Orcas cooperate inside the water when hunting flocks of fish. With mutual effort, the orca herds the fish into tight balls by slapping them with their large tails. They brandish their white bellies and blow bubbles to frighten the fish.

When the fish is appropriately herded, the killer whales take turns killing them with their tails and eating them.

This type of feeding when a few orca whales swim around a herded flock of fish is called “carousel feeding” because it resembles a merry-go-round.

Seals and penguins in the arctic perch on ice floes to avoid predators, but orcas figured out a way to hunt them, anyway. A group of killer whales will swim under a block of floating ice and create a wave that knocks the prey off of it.

Not every seal that gets knocked off ends up eaten, however. Sometimes the orcas just leave them be, which is probably because they train how to perform this hunting technique even when they are not actively feeding.

Orcas are known to kill and harm other animals just for fun.

Can a Moose Kill Another Animal?

A moose can kill animals that are smaller than them, and most of those living in their habitats are.

They can kill wolves that attack their calves, and some people even think that they’re capable of beating a grizzly dead.

What Are the Physical Characteristics of Moose?

Of all the deer, the moose is the largest representative. This is the tallest mammal in North America.

Moose has long legs, with the front being longer than the rear. This body conformation makes it possible for them to jump over fallen trees and other obstacles in the forest.

Their shoulder muscles are very strong and developed and produce a humpbacked appearance.

When the broad and flat antlers start growing, they are covered in velvet (soft and fuzzy skin). The velvet provides nutrients for the growing antlers and when they reach full size the cover starts dropping.

The Nostrils of a Moose

The nostrils of moose act like blowholes in dolphins. They have valves that shut their nostrils when they go beneath the water surface. Moose can keep their breaths for up to a minute using this mechanism.

Moose are most active during the day and prefer dusk and dawn. Their eyesight is very poor, but their excellent sense of smell and great hearing help them get around with ease.

They are solitary animals and don’t live in families and herds. Calves follow their mothers around only for a year and then continue on their own. Males and females get together during mating season and go their separate ways afterwards.

What Are the Physical Characteristics of Killer Whales?

With 4-inch (10 centimeters) long teeth, they are one of the world’s most formidable predators.

Their swimming speed is 28 miles per hour (45 kilometers per hour), and they have a bite force of 19000 per square inch.

Killer whales do sound intimidating, but if you compare them to sperm whales, Orcas are pretty much what a child’s toy car is to an adult person.

Orcas live in groups and cooperate while hunting, which gives them quite an advantage over other predators. Let’s get one thing straight, an individual Orca still is a force to be reckoned with.

Their matrilineal groups are called “pods.” Orca pods can have between 5 and 30 members. Each pod has a unique hunting technique that is passed down from mother to daughter, which is what matrilineal means.