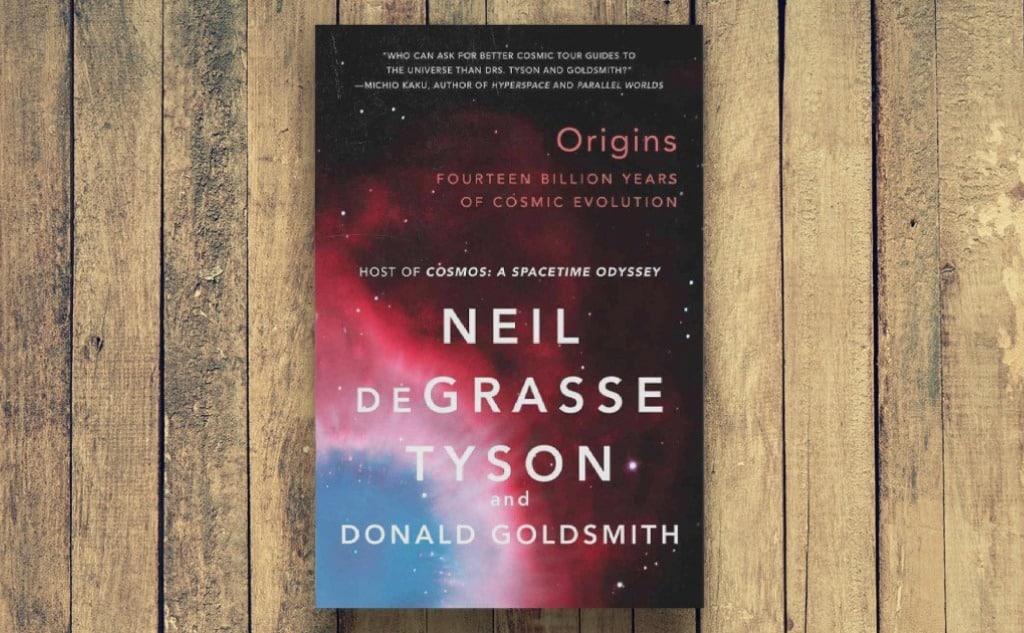 This is a review of the book Origins: Fourteen Billion Years of Cosmic Evolution by Neil deGrasse.

This book covers the entire universe in a few hundred pages.

Tyson and astronomy writer Donald Goldsmith tackle the king of all subjects: our universe.

Like most cosmology reads, Tyson and Goldsmith set out on a voyage to explore our universe’s past, present, and future.

You encounter seemingly everything on your journey, from the big bang to black holes, galaxies, to exoplanets.

Furthermore, your explorations will reveal and dive into some of today’s most fascinating and yet unsolved mysteries in space.

Sparing no detail, Tyson and Goldsmith have literally jammed 14 billion years into a single 300-page read.

Firstly, as any Carl Sagan fan will attest, Neil deGrasse Tyson has all but officially taken the baton as this generation’s face of pop-sci. As a result, Tyson’s Sagan-like delivery paints some of the most vivid explanations of our universe.

Especially given that cosmology is completely mind-bending to even the most brilliant minds, clear-cut and digestible explanations are crucial.

Frankly, most of us, myself included, have cracked open a new book, only to have our thrills soon shattered by a lack of understanding. Certainly, this is a common risk in astronomy and physics literature.

However, I will end this by acknowledging that physicists and works pull this off much more successfully than Tyson. For instance, if you read our review on Brian Greene’s “Fabric of the Cosmos,” you will understand.

Despite Tyson’s notable wordsmith capabilities (see the previous section), astronomy subjects even he or Sagan can completely simplify. After all, were that the case, even children would have a rather thorough understanding of our universe, no?

That said, some sections and chapters of Origins became drastically harder to stay engaged with.

However, this was not a lack of great writing and subject matter. It simply reflects the overwhelming nature of deep space sciences.

Personally, I would have enjoyed these sections being more slightly broken up or modified to give a slightly higher view.

Origins begins similar to an episode of Cosmos, in which even non-science-loving folks can quickly adapt and enjoy.

Yet, midway, it suddenly begins reading much more like Hawking’s A Brief History of Time. In other words, it takes a very rigid turn from rather basic to quite advanced reading.

Firstly, this is, and will always be, subjective observation of pure opinion. Then again, this is a review, after all.

But Tyson, like so many other wonderful science authors, repeatedly breaks a pop-sci golden rule throughout Origins. Divine creation versus evolution.

Again, I acknowledge that this is in the eye of the beholder. However, truthfully, I make this observation not based on religious biases. Rather, the mere fact that such subjects are avoidable.

This is the analog of approaching a complete stranger and unsolicitedly showering them in your political opinions to the literary world.

I suppose the subject could theoretically be gently delivered. Although, I still strongly believe it can be avoided entirely, yet easily inferred.

Once again, I will point out Brian Greene’s extraordinary ability to do so.

While not a great deal to everyone, I found this to make Tyson come across as highly arrogant and not tactfully or diplomatically, as he is one to do.

For any science reader similar to me, you enjoy the thrill of the unknown. Indeed, my love of astronomy stems primarily from my realization that I will simply never fully understand it.

Tyson and Goldsmith satisfy this itch beautifully during the latter half of their book. Then, from advances in exoplanet spotting to possibilities of life’s beginnings and ends, the book becomes downright baffling.

Infamously, Tyson can create mystifying excitement better than most in modern physics. Origins is no slouch when it comes to such thrills.

Despite being a surprisingly challenging read, Origins: Fourteen Billion Years of Cosmic Evolution deserves a spot on even beginning astronomers’ bookshelves.

Born in the Bronx, New York, Neil deGrasse Tyson was the second of three children.

Ultimately, he would graduate from Bronx High School of Science, go on to receive a bachelor of physics from Harvard University and his Ph.D. in astrophysics from Columbia University.

Tyson has lived a fruitful career that seemed to expand as rapidly as the very universe he so adores.

From being appointed to head space future committees at the White House to hosting a litany of television documentaries and series, like Nova’s Origins, Tyson is ubiquitous in modern science.

Filling the legendary shoes, Tyson has since picked up the astronomy baton since Sagan’s passing in the late 1990s.

Most serendipitously, Tyson was appointed Director of Hayden Planetarium in 1996, the very place in which he first found his passion for the universe. In fact, he remains director to this very day.