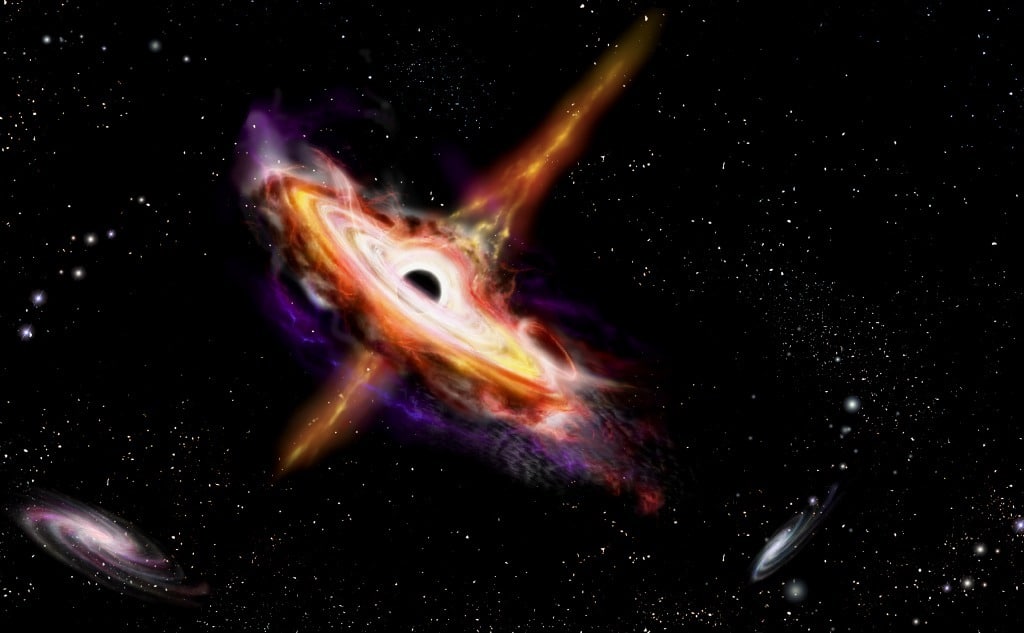 This is about quasars.

So if you want to know what a quasar is put simply, then you’ve come to the right place.

During the 1960s, the dawn of radio astronomy unveiled a wealth of exciting new mysteries.

Eventually, over time evidence told a full story, and we learned something new about our universe.

Among the greatest radio signal mysteries of the decade: quasars.

Let’s break these distant cosmic mysteries down and get quasars explained!

Not to mention, some were found to be moving away from Earth at a third of the speed of light (around 22 million mph).

For years, astronomers quarreled over the cause of these supposedly speedy bright objects.

From advanced alien civilizations to incorrect measurements of the universe’s expansion, explanations ran the gamut.

Later, in the 1980s, astronomers began agreeing on the active galaxy theory. This idea stated that some unknown processes caused certain galaxies to blast massive amounts of energy from their cores.

Now, confident in the active galaxy theory, astronomers wanted to know the cause.

Why was extreme energy blasting out of some galaxy’s centers?

Today, we know that nearly all galaxies have massive, dense black holes at their centers.

And, as matter nears the black hole, it is heated to millions of degrees, and enormous amounts of energy are emitted as a result.

This energetic center is known as the active galactic nucleus (AGN).

When a neutron star’s energy jets point directly at Earth, we call it a pulsar.

Otherwise, all characteristics of neutron stars and pulsars are identical.

When a quasar’s jets are perpendicular to us, we know it as a radio galaxy.

Next, quasars seen from angles are simply called quasars.

As mentioned above, the beaming jets of a quasar result from material getting near a black hole.

At this point, a black hole essentially “feeds” on cosmic material.

And, as the matter approaches the black hole, an accretion disc is formed around the hole’s “surface” (the event horizon).

Now, the material in the disc is heated to staggering multi-million-degree temperatures.

As a result, excess energy is released, blasting out in the twin jets of a quasar.

However, the material is not always approaching a black hole.

There are periods of time in which little or no material is nearby. Now, without energy production, quasar jets shut down.

Hence, many astronomers jokingly refer to this process as a black hole’s “burp.”

Are We an Active Galaxy?

Now, we know that nearly all galaxies have black holes at their centers.

Also, we know that our own Milky Way galaxy, indeed, has a massive black hole named Sagittarius A*. So then, why does the Milky Way not have a quasar shooting out?

Well, as mentioned above, quasars’ massive energy results from a black hole “feeding” on the material.

Right now, our home black hole does not have food to eat. Therefore, the nucleus of the Milky Way is not currently active.

However, many astronomers believe that our galaxy was, at one time, an active galaxy with bright jets blazing out.

Also, some believe that we will again become an active galaxy in the distant future.

In billions of years, our Milky Way will collide with the massive neighboring galaxy, Andromeda.

And, as you might imagine, with the gargantuan amount of matter in both galaxies colliding will yield dramatic results.

New matter flung toward our center will activate our black hole, and it again becomes a bright quasar!