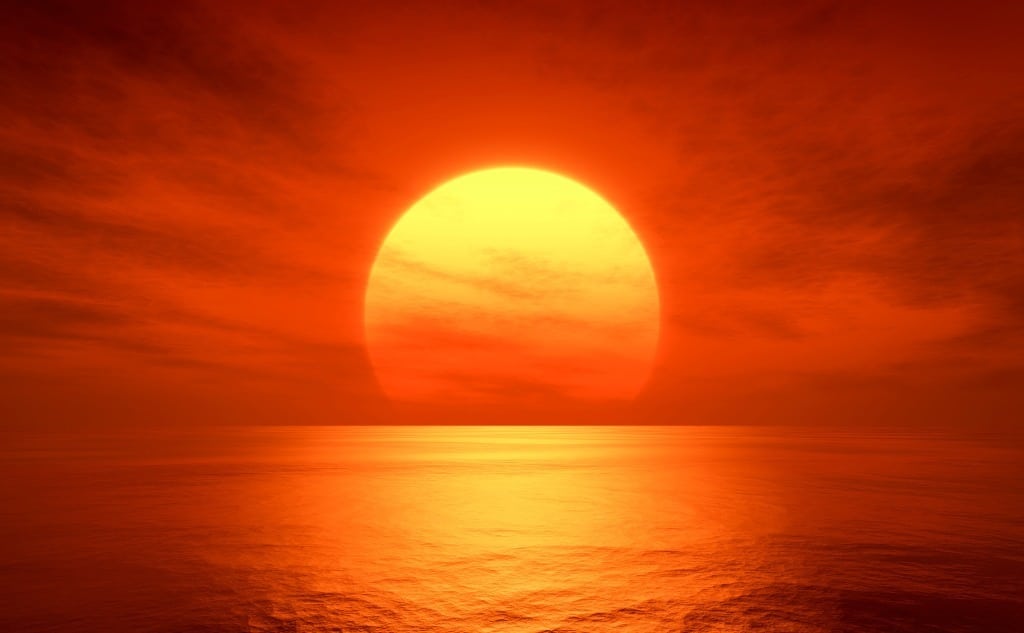 This is what a red Sun means.

Have you ever seen a red Sun?

So if you want to know why the Sun might be red and what it means, then this article is for you.

First, What Actually Is the Sun?

The Sun is the perfect sphere of hot plasma right in the center of our solar system.

Basically, it is a giant, gaseous fireball. Even so, it actually has cold spots on it, believe it or not. These cold places on the Sun are called sunspots.

Here are some important facts about this wonderful star:

Why Does the Sun Appear Red?

According to Johannes Kepler, the planets revolve around the Sun in an elliptical orbit.

We can prove his solar system model is true by examining different phenomena that happen in our solar system.

Due to the elliptical orbits, Earth’s distance from the Sun at perihelion (closest to the Sun) and aphelion (farthest from the Sun) is greater than the vertical distance.

So at the time of sunrise, the light rays from the Sun have to travel a greater distance in the Earth’s atmosphere before reaching our eyes. This is because the Sun at the horizon will be at a greater distance between the observer and the Sun.

In this journey, the white light coming from the Sun has a VIBGYOR pattern. In this pattern, the shorter wavelength and lower speed of blue light cause it to scatter around in the sky.

The red light, which has a longer wavelength and a higher speed, reaches our eyes first, and we see a red Sun.

When the Sun comes overhead, there is a shorter distance between the observer and the Sun because of the elliptical orbit.

At that time, the Sun appears white because there is very little blue light scattered around.

When the Sun gets returns to the horizon in the west, the same thing happens again.

The distance between our eyes and the Sun increases the red light because of its longer wavelength and faster speed, so what reaches our eyes is the red light, so the Sun appears to be red.

Below is a visual to help explain this:

The wavelengths of different colors along the visible light spectrum are provided below:

There is another reason the Sun can get red even in the daytime.

When dust particles or smoke fills the atmosphere, the longer wavelength of light, which looks red, scatter more effectively.

So we see that the Sun is red. It is why we can see spectacular sunsets in a desert environment.

Different people have superstitions about see a red Sun. For example, in Korea, people once believed that a red Sun brings bad luck.

In many ancient societies, the color red was often associated with shamanistic power and the ability to ward off evil spirits or bad luck.

But, why could the color diffraction caused by rays of light going through the dust and pollution in the atmosphere be an “omen,” good or bad?

Why do people think that there are such things as “omens”?

To answer these questions, we have to remember that people had to develop ways to explain the natural phenomenon without the scientific explanations we have today, which often led to today’s beliefs categorize as myths or superstitions.

However, in science, everything happens for a reason. There must be a cause for something to happen. Many times those ancient peoples were not entirely wrong.

These unusual phenomena could have some direct effect on the world around them.

However, without scientific explanations, omens and similar responses were often the best those ancient people could do to explain those unusual occurrences, like a red Sun.

What Is a Blood Moon?

Some people claim that a blood moon is a sign for the beginning of the end times. This idea originates in the Book of Joel.

The sun will turn into darkness, and the moon into blood before the great and the terrible day of the Lord comes.

When this was written, there was no other explanation for this phenomenon. You have to admit it does look pretty scary.

However, today we know that a blood moon, based upon scientific investigation, is nothing more than the scattering of light reflected through dust particles.

In other words, it’s not scary at all. In fact, it’s fascinating, don’t you think.