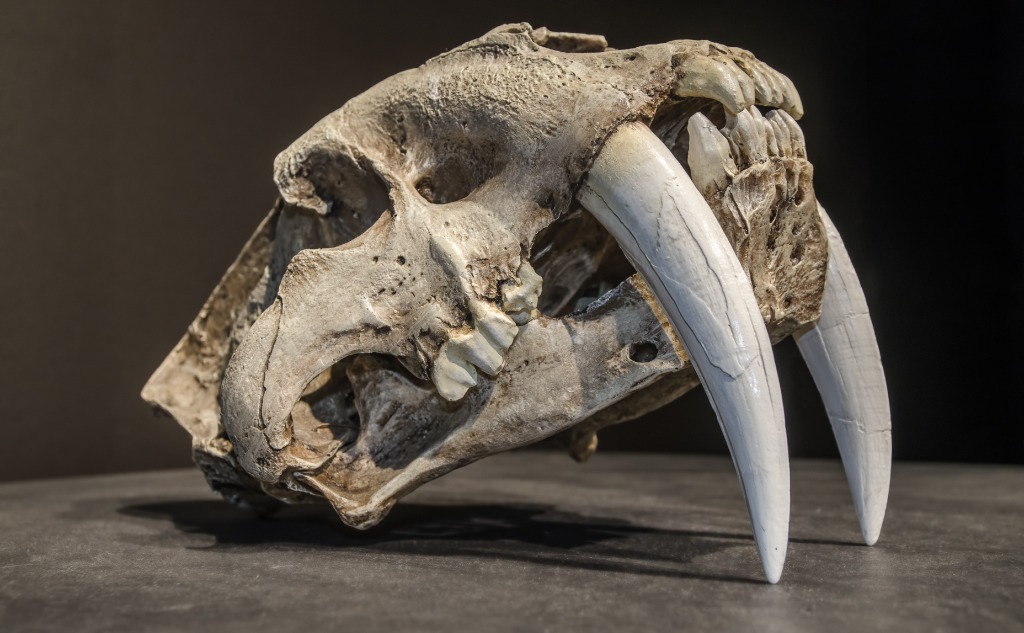 Here’s who wins in a fight between a saber-toothed tiger and a tiger:

Saber-toothed tigers are better at hunting in groups.

In a one-on-one fight, a saber-toothed tiger would be equal to a modern tiger, and the result would be unpredictable.

If you want to learn all about the outcome of a fight between a saber-toothed tiger and a modern-day tiger, then you’re in the right place.

What Would Be the Outcome of a Fight Between a Saber-Toothed Tiger and a Modern-Day Tiger?

The largest living big cat, the tiger, is nearly invincible in all one-on-one conflicts.

It does have a worthy rival in another era in its own extinct counterpart, though, the saber-toothed tiger.

While these beasts cannot face off in the modern-day and would likely not choose to fight each other on most occasions, it is interesting to wonder which would be stronger.

There are reasons that the tigers with more compact teeth are still alive while their relatives faded out. We’ll get into that later.

The majestic and intelligent tiger is capable of defeating animals such as:

Although extinct for thousands of years, if scientists develop the capability to regenerate one of their ancestors, the saber-toothed tiger, from its fossils to pit it against the biggest living cat, the competition would be worth seeing.

Who Is the Saber-Toothed Tiger?

Named after the blade-like sharp canine teeth in their upper jaws, these big cats were members of a cat subfamily, Machairodontinae, which has long since become extinct.

By definition, any big cat can be called saber-toothed if it possesses knife-like curvy and sharp canine teeth.

Saber means two-edged knife, which signifies the importance of their large canine teeth.

What Are the Saber-Toothed Tiger’s Species?

A number of genera in this family contained several saber-toothed cat species, but the most important genus was Smilodon.

All three species are collectively known as “saber-toothed tigers.”

They roamed throughout America and Europe until about 10-12000 years ago.

S. populator was the most powerful and largest species, weighing up to 882 lbs (400 kg.)

The fossil records have shown their shoulder height to be almost 39 in (100 cm).

What Is the Saber-Toothed Tiger’s Anatomy?

They had slightly longer forelimbs but with a slightly elevated shoulder bone.

Although similar in size to modern big cats, they were more robust, with strong musculature, short tails, and relatively strong necks but shorter feet.

Their chin was reduced, so their large canine teeth were always hanging outside the mouth.

Of course, their most prominent feature was those extremely large canine teeth in the upper jaw, which could be as long as 7 in (18 cm) for S. populator.

What Is the Saber-Toothed Tiger’s Diet?

What would these tigers have liked to eat?

Obviously, the diet of a predator can’t be grass.

As apex predators, they were feeding on a range of large herbivores, like large bison and camels.

They were known to hunt the extremely large but now extinct relatives of modern elephants, the woolly mammoths.

What Is the Saber-Toothed Tiger’s Fighting Strategy?

How were these cats able to take down such massive mammoths?

The mammoths were extremely large creatures with a bodyweight of around 5-12 tons.

The answer lies in their efficient attack and hunting strategies.

They usually hunt their prey by ambush, but some (especially S. populator) would even simply overpower the prey with the sheer size and weight.

Those large canines were used to slash the prey’s muscles and for the kill.

What Is the Saber-Toothed Tiger’s Social Organization?

Their social organization into groups was just like modern-day lions and was helpful to take down massive creatures.

However, their group hierarchy was also not as strong as in the pride of lions.

Saber-toothed size holes were found in their bones, proving that the group organization was somewhat violent.

Clashes in a group were common, often resulting in the death of weak members.

What About the Saber-Toothed Tiger’s Extinction?

One may question, what caused the extinction of these cats?

These cats went extinct around 10,000 years ago, along with many other carnivorous megafauna in what was termed a quaternary extinction event.

Various causes noted by the researchers include human hunting, lack of food, and climate change.

A climate change resulting in the reduction of the population of their prey proved to be fatal for them.

Similarly, the arrival of humans further increased the competition for resources.

The gradual absence of large herbivores due to human hunting was also detrimental to them because small animals were not suitable targets for their enormous canine teeth.

Encounters with the bones of small animals can result in the loss of canine teeth.

Although most of you may have assumed their powerful canine teeth to be their supreme weapons, they may not have always been so useful.

The weaker muscles in the jaws reduced the effectiveness of their canines.

Extremely large size means lack of strength, and consequently, the canines were prone to break if they faced strong bones in the prey.

Hence, the canines were useful only on the soft parts of prey with a lower biting force of just a third of that of a modern lion.

With such a weak bite force, the beast had to rely on its strong neck muscles for killing its prey.

Their thick and strong limbs partially compensated for their weak teeth.

Once their canine teeth were broken, the tiger, being unable to hunt, was eventually starved to death.

Who is not familiar with these adorable, strong, extremely agile, and intelligent creatures?

The enormously powerful and beautiful tigers are supreme predators.

They roam throughout the globe and prefer savannahs, grasslands, rain forests, and thin forests where their potential prey (small to medium-sized herbivores) are easily available.

They are adapted to a variety of diverse climes, from the warm and humid climes of Bengal to the cold of Siberia.

What Are the Tiger’s Species?

At least nine different regional subspecies of tigers have been recognized, and a number of subspecies have become extinct.

The most important and common species, the Bengal and Siberian tigers, are described below.

What Are the Tiger’s Physical Advantages in a Fight?

Tigers can match their saber-toothed ancestors easily, blessed with:

Although their canine teeth are only a third of the size of Smilodon’s teeth, they are more compact and can be more reliable when faced with another ferocious cat.

Their camouflage, jumping, and swimming abilities make them all-weather predators.

Who Would Win in a Fight Between a Tiger and a Saber-Toothed Tiger?

You may wonder that why these cats need to fight each other? Conflict is a natural phenomenon.

Any two animals can fight each other for resources, particularly if they are deficient. These big cats coexisted for millions of years.

The oldest known fossil of a modern tiger is 2 million years of age.

Although their geographical ranges are different, the chances for a conflict were high.

Given that they have similar prey, their mutual fight was not only possible but highly probable.

However, the conflict was most likely to end in a mutual retreat because these species tend to avoid tough targets.

Another argument supporting their mutual competition is that the Smilodons were facing food shortages towards their extinction.

So a starving Smilodon may come across a tiger and attack it.

The result would be a fight to the death.

Can a Saber-Toothed Tiger Beat the Modern-Day Tiger?

So, can a saber-toothed tiger beat the invincible? Both are powerful and strong.

A saber-toothed tiger can slash and tear open its victim with its powerful knife-like canines, while the Siberian tiger is the largest and strongest living wild cat.

Although saber-toothed tigers have long gone extinct, a glimpse into their hunting technique and their prey may give us some hints.

Saber-toothed tigers were superb cats for the old days when woolly mammoths used to roam in the wild.

The saber-toothed tigers were known to hunt these animals.

The present-day Siberian tigers are reluctant or even unable to hunt down the modern-day elephants, while a group of saber-toothed tigers could kill even larger animals.

Hence, it can be assumed that they were better group hunters.

So when a group of saber-toothed tigers ever faced a solitary tiger, the outcome was obvious.

The Siberian cat was most likely to end up in their bellies.

But the outcome can’t be so easy to predict when both these beasts face each other alone with no room for escape.

Who Wins in a Fight Between a Saber-Toothed Tiger and Siberian Tiger in a One-on-One Fight?

Let’s arrange a hypothetical fight between the largest tiger, “the Siberian tiger,” and the largest Smilodon, the “S. populator.”

Both have several advantages over the other.

What would happen when a large Smilodon, separated from its group, has to face the Siberian tiger?

The odds are almost balanced.

The tiger has more endurance and more reliable canines.

Sensing that his canine teeth are too fragile, a Smilodon may attempt a sudden ambush.

It may try to make a slashing attack into the soft parts of the tiger. This will result in profuse bleeding and slow death for the tiger.

But if such an ambush fails, the canine teeth of a saber-toothed are likely to be broken if they smash against any bony structure of tiger.

With a broken canine, the saber-toothed tiger becomes harmless and is prone to attack by a tiger.

The tiger may not be able to suffocate the saber-tooth easily given the strong musculature of the saber-toothed neck, but it can deliver multiple blows by its claws and teeth.

Ultimately the higher stamina and endurance of the tiger will prevail over the Smilodon and force it to retreat to avoid further harm.

So, it is ultimately likely that the Siberian tiger would win the day if the Smilodon’s ambush fails.

Who Wins in a Fight Between a Saber-Toothed Tiger and Bengal Tiger in a One-on-One Fight?

The odds are again almost identical.

The lethal bite force of a Bengal tiger can dismantle his saber-toothed counterpart easily.

Similarly, a swift ambush attack by the Smilodon against the tiger can cause the death of the Bengal tiger.

In an open battle where no one can take advantage of any environmental factors, the battle will be decided by the endurance and all-weather fighting capabilities of the Bengal tiger.

But the fight will be far from one-sided or an easy victory for the tiger.

Even in the best-case scenario, a tiger can sustain life-threatening injuries from a Smilodon.

Similarly, a winning Smilodon is also likely to be mortally injured at the end.