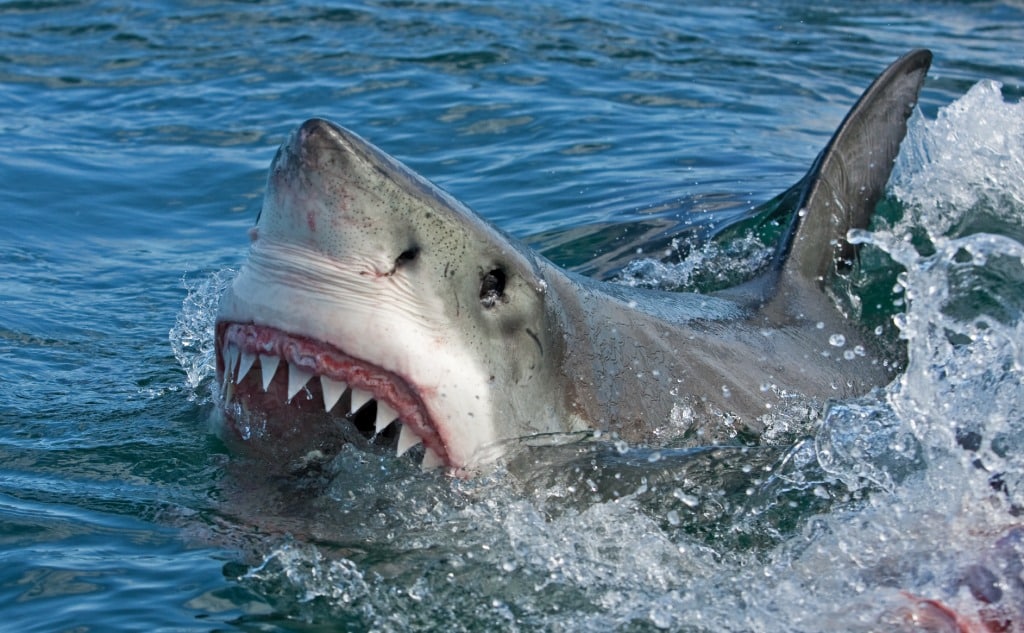 Here’s whether a shark or a crocodile wins in a fight:

The shark is always the prey when crocodiles and small sharks fight in shallow waters.

If you want to learn all about who wins in a fight between a shark and a crocodile, then you’re in the right place.

Who Wins in a Fight Between a Shark and a Crocodile?

The only place where the great white shark and the saltwater crocodile can meet is the open water.

This is the natural habitat of the great white shark and gives them a maneuvering advantage over the slower saltwater Croc.

It would take multiple hits and a lot of biting to beat the crocodile, but eventually, the shark would probably win.

If it’s any other species of sharks smaller than the great white, the crocodile would easily take the win home.

Fights between crocodiles and small sharks sometimes happen in shallow waters, and in this case, the shark is always the prey.

It’s a bit different with great whites since they are rare and can only be found in deep waters.

That’s where the main advantage for the great white shark over the saltwater crocodile lies.

Who Has a Stronger Bite: A Shark or a Crocodile?

The great white shark does have a huge jaw, but as a result of its diet, it doesn’t have the strongest bite amongst all shark species.

It’s a lot easier to bite through a seal (great white prey) than through the shells of a turtle (tiger shark prey).

The world’s most ferocious jaws, belonging to the saltwater crocodile, can snap with a force of 4000 lbs (2 tons).

It’s not a joke when this shark bites you but compared to the crocodile, they seem toothless.

The jaw size of the shark is wide enough to bite any part of a crocodile, but it lacks the force and proper teeth to do serious damage.

Although a crocodile can bite-crush almost anything, his mouth is simply not big enough for a great white shark.

Since they feed on different types of animals, it’s no surprise that sharks and crocodiles have different teeth shapes.

Crocs hunt prey that is larger and with stronger skin and bones, so they need teeth rigid enough to devour their victims.

White sharks don’t need to crunch the bones of the things they hunt and go for biting rather than squeezing with huge pressure.

A shark’s teeth look like a saw, and they are a few rows of spare ones behind each front tooth.

It’s not rare for sharks to lose and replace teeth during a struggle.

Who Will Participate in a Shark vs. Crocodile Fight?

As part of the order Crocodilia, the family has caimans, alligators, and caimans as their closest cousins.

The largest of them all is the one who is going to be picked for the Shark vs. Crocodile fight.

The saltwater crocodile is the largest living reptile, and this ancient being is also the one causing most human deaths compared to others of its family.

There are more than 1000 shark and ray species, and new ones are discovered each year.

If we want to pick the contender for this epic fight we will probably go with the biggest shark of them all, correct?

The whale shark is the biggest fish in the world but doesn’t participate in fights.

Its megamouth serves as a filter feeder to swallow anything coming its way (possibly a crocodile even).

The real shark fighter and the one with the most recorded attacks on humans is the great white shark.

It’s the 6th largest shark species, and the only one coming near its ferocity, strength, and size is the tiger shark (4th largest).

Characteristics of the Great White Shark

Legendary for being one of the fiercest predators, the great white shark caused admiration and fear in people for many years.

This cartilaginous fish is probably causing more harm in people’s imagination than in real life.

While humans fear the great white shark expressly and consider it a man-eating predator, this powerful and efficient hunter never had a preference for people.

Attacks happen when the shark is confused or just wants to taste the moving object.

The top of the great white shark is darker in blue of gray variations, while the lower area of the body is white.

Such discoloration is a hunting advantage because prey doesn’t notice the shark’s figure, and to them, it looks like the bottom of the ocean.

A great white shark has a fusiform and robust body. That means it’s shaped like a spindle and big and strong at the same time.

Strong pectoral fins and a triangle-shaped back fin are placed behind its narrow and pointed snout.

There is a smaller fin near the tail which ends with long lower and upper lobes.

Whiteys have delicate skin that cannot withstand huge penetrating forces, which puts them in an inferior position compared to crocodiles.

Characteristics of the saltwater crocodile

The saltwater crocodile is believed to be the animal that is most likely to eat a human being of all other animals in the world.

At the back of their mouths, saltwater crocodiles have valves that seal off the cavity from the throat.

This way, they can open their mouth while under the water.

However, it’s not possible to eat the prey beneath the water surface because they will need to swallow and allow their throats to open and fill with liquid.

When a crocodile catches something underwater, it has to take it to land and eat it or raise itself with its head above the water and swallow.

The male crocodiles are much larger than the females.

Their enormous heads and broad, heavy bodies are grey to brown so that they can blend in their muddy habitats.

Having short and strong limbs, their biggest attributes are their long and strong jaws.

A croc’s skin appears as some sort of prehistoric armor. It’s not easy to penetrate through it at all.

Where Can You Find Sharks?

You can find sharks in a lot of places in the world. They inhabit tropical waters nears the coasts and even temperate and cold areas.

Outside of America, sharks dwell in the waters of Japan, the Mediterranean Sea, Oceania, and South Africa.

Generally, the great white shark swims and hunts solitarily. From time to time, they can reunite with others. The groups can consist of a couple of sharks or even groups of 5-6.

Females mostly take the lead in the groups because of the existing hierarchical dominance.

Larger sharks dominate over the smaller ones, and when the group accepts newcomers, the fresh ones are subdued by the old leadership for some time.

The animal is equally active day and night. In an attempt to get familiar with the surroundings or look for prey, great sharks can sometimes jump out of the water.

While not being aggressive towards others of their species, an occasional warning bite might happen.

Where Can You Find Crocodiles?

Saltwater crocs can be commonly found in and around river mouths, mangrove swamps, and coastal marshes.

When crocodiles feel capable of swimming a lot, they can travel upstream.

Seasonal floods make it possible for crocodiles to get to places that are otherwise hard to reach.

It’s not unusual for them to live in the open ocean for short periods as they are quite capable of that.

Exploring is an exciting activity that can make them cross large water expanses.

The saltwater crocodile is thought of as one of the most sophisticated and intelligent reptiles on the planet.

They live in groups and communicate with each other by crocodile-barking, hissing, chirping, and growling.

Saltwater crocodiles invest a great deal of their time thermoregulating to maintain their body temperatures.

For example, when it’s too hot, they go inside the water, stick their eyes and nostrils out and just wait until they are cool.

Do Crocodiles and Sharks Meet in Nature?

Crocodiles and sharks can occasionally meet in the water and have close encounters; most of the time, the situation would end with the shark fleeing the scene or getting eaten.

Brutus is an 80-year-old crocodile living in Adelaide River in Northern Australia.

He some kind of celebrity because his front right leg is missing, and there are even boat tours that take you to him.

Photographers have caught him a few times with a bull shark in his mouth freshly caught from the river.

But you know what’s even more interesting?

It is sharks that took his front leg in the first place.