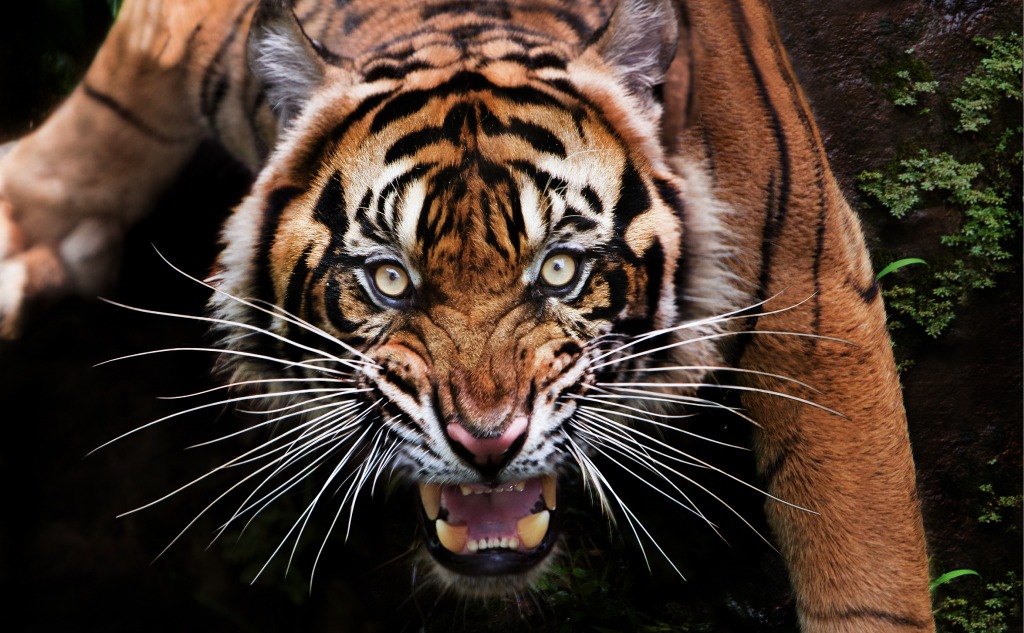 Here’s who wins in a fight between a tiger and a grizzly bear.

In a fight between a tiger and a grizzly bear wins whoever strikes first.

The tiger would win if it successfully used its powerful bite on the neck since it is very hard to get out of a tiger’s jaws.

Once the bear manages to get the first swing at the tiger’s spine or legs, the fight is over.

If you want to learn all about who wins in a fight between a tiger and a grizzly bear, then you’re in the right place.

Who Is the Grizzly Bear?

Two other living subspecies of brown bears, the Kodiak bear, and Alaska Peninsula brown bear, are also sometimes referred to as Grizzly bears.

What Are the Physical Characteristics of a Grizzly Bear?

The weight of the same Grizzly bear can vary according to the season as they pass through a stage of hyperphagia (extreme eating), putting on a lot of fat followed by 6-7 months of hibernation, losing 25-30% of their body weight.

A characteristic hump on the shoulders is an identifiable mark of Grizzly bears and differentiates them from a black bear.

They are also characterized by small rounded ears, a rump lower than the shoulders, and 2-4 in (5-10 cm) long claws that are less rounded than those of black bears and perfectly adapted for digging.

The fur of Grizzly bears is brown with white-tipped hairs that sometimes appear grey.

What Is the Habitat of a Grizzly Bear?

Their population increases near lakes and river streams where they hunt salmon.

The Grizzlies living near rivers are larger than midland grizzlies because of the abundance of food.

What Is the Diet of a Grizzly Bear?

Grizzly bears are Hypocarnivores (consume meat less than 30% of the total diet), eating almost everything from seeds, berries, insects, and fish to dead bison as scavengers.

They hunt small deer species, calves and cubs of bison, moose and elk, and salmon when they move against the river stream.

They scavenge by eating up kills of other predators and dead bison stuck in the ice.

They dig for the middens of red squirrels to find the seeds and nuts.

Outside the Yellowstone national park, meat constitutes only 5% of the grizzly bear’s diet.

How Do Grizzly Bears Reproduce?

They reach sexual maturity at the age of 5 years, and there is a delay in the embryo’s implantation after mating for 4-5 months until the female goes into hibernation.

What Is the Behavior of a Grizzly Bear?

They can fight with their own siblings over territory, females, and food.

Newborn cubs remain with their mother for 2-3 springs and then leave as sub-adults.

The males can kill the young ones, but the females are viciously protective of their cubs.

Grizzlies can gather on the river streams for salmon-hunting, but the larger males also fight for the dominant place to hunt easily.

In the bears’ world, there is little sharing of carcasses.

Bears are known to grieve and moan on the death of their mothers.

Now we should know a bit about the other combatant, the tiger.

Who doesn’t know the tiger?

The largest and the most dangerous of all cats, characterized by a broad face, lean and beautiful body with a specific fur pattern, and excellent hunting and fighting ability.

They are excellent swimmers and can climb trees as well.

What Are the Physical Characteristics of a Tiger?

The tigers of colder climates are larger than those found in the warmer regions, and males tend to be larger and stronger than females.

The colors of tigers vary from white-furred to pale golden with light brown to black stripe patterns, which are visible even in shaved individuals.

They also have thick and long hairs around their neck and face that appear as the mane.

They have small rounded ears with spots, a long tail, very strong paws to kill anything, and very sensitive whiskers spread over the whole body.

What Is the Habitat of Tigers?

As far as geography is concerned, different tiger subspecies are found in different geographical regions.

For example, Bengal tigers are native to India, and Amur tigers are found in Siberia.

Tigers live in savannahs, forests, mangrove swarms, and rocky areas wherever the prey is abundant.

93% of natural tiger habitat is under threat because of human encroachment.

What Is the Diet of Tigers?

Unlike Bears, tigers are exclusively carnivores, meaning they can only digest meat.

They hunt almost everything with flesh ranging from small hares to larger Indian bison.

Tigers may also take on other predators, including small bears and their own cubs.

The meat is deficient in vitamins and fiber.

So tigers in captivity are also fed liver once a week to optimize nutrition.

Tigers may also be seen eating small amounts of fruits and vegetation to supply fiber occasionally.

How Do Tigers Reproduce?

Unlike Grizzlies, tigers reproduce at a faster rate, almost throughout the year.

The female is receptive to the male for 3-6 days, and mating occurs frequently.

The gestation period is from 93-114 days, and 2-3 cubs are produced, the rearing and protection of whom is their mother’s responsibility.

A tiger cub is able to hunt at 11 months of age, the age at which the Grizzly cub is enjoying childhood with its mother.

What Is the Behavior of Tigers?

They mark their territories by spraying urine and glandular secretions and continuously patrol them.

The male and female join only for mating, and the female rears and protects the babies.

It is a common perception that tigers are nocturnal, but they can also hunt during daylight.

Here, it is pertinent to mention that aggression is innate, but hunting is a learned behavior of a tiger.

How Does a Tiger Compare to a Grizzly Bear in a Fight?

Believe me, in this fight, none of the combatants are weak, and both are extremely dangerous to each other.

Let’s compare the advantages and disadvantages of both.

In this comparison, I will be considering the fully healthy, fully grown, and fit individuals of both species.

The front legs of a grizzly bear are the strongest of all land predators.

They have a biting force of 1200 psi enough to crush a bowling ball.

Their strong fast-twitching muscles can land a spine-breaking blow to a tiger.

Normally, during the fight, they outmatch their foe by shattering bones and disabling them.

On the other hand, tigers are strong enough to lift twice the weight of their body.

For comparison, a human punch generates around 120-150 psi.

A tiger is strong enough to attack prey of double its body weight.

Although tigers are very strong and powerful, the most vital thing for a tiger is to avoid the nasty blow from the Grizzly during the fight as the Grizzly is much more massive than a tiger.

This speed is extremely helpful in hunting and would be an amazing advantage for the tiger in the fight with a Grizzly.

It can exhibit rapid and agile maneuvers to surprise the bear.

On the other hand, Grizzlies, too, have a handsome average speed of 25-28 mph (40-45 km/h), good enough to tackle the rapidity of the tiger.

So, in speed and agility, the bear is not far behind the tiger, although the tiger has an advantage.

In terms of stamina, the Grizzly is far better than their tiger.

They take down their prey in long chases and can run for miles at a good speed without taking a break.

Tigers are notorious for low stamina and leave their prey if it needs a long chase.

Although they are very fast in short bursts but are not successful in the long chases.

So, a prolonged fight would never be in favor of the tiger.

It has to either run away or lose its life when confronting a bear in the long run.

If a bear takes a defensive mode for a long time and makes no mistakes, the tiger is surely doomed.

In a fight, defense is as important as attack.

The tiger’s razor-sharp claws of up to 4 in (10 cm) are efficient for an attack as well as defense.

They can cut through the naked skin of the bear and are hooked as well.

The Grizzly’s claws are not that sharp and are meant for digging instead of cutting.

The tiger’s paws, though very strong, are outmatched when compared to a Grizzly.

So, the blow of the Grizzly is more effective than that of a tiger.

The skin of the Grizzly is thicker than that of the tiger as well.

It is hard to penetrate and is accompanied by thick layers of fat and long fur.

So, the claws of the tiger are better, but the paws and skin defense of the Grizzly are stronger and at an advantage.

With the evolution of thousands of years, killing has become an instinct of a tiger.

A tiger can forget to hunt but never loses the potential to attack.

Attacking is an instinct of tigers, and this makes it extremely dangerous.

They cannot survive without meat and therefore are hunting experts.

On the other hand, meat constitutes only 5-15% of a Grizzly bear’s diet.

They are omnivores and opportunistically hunt small prey and seldom attack larger animals.

Although they can be viciously dangerous, that viciousness is less related to hunting.

So, on the scale of attacking temperament, the tiger wins as they are accustomed to killing.

With color vision, excellent hearing ability twice as good as humans, and with a smelling power equal to 51 bloodhounds, Grizzly bears can be very tough to shake off.

On the other hand, with an acute, colored, and excellent night vision, a hearing capacity thrice to that of humans (upper limit), and a great sense of touch with highly sensitive whiskers spread all over the body, tigers can outmatch a bear.

They don’t have a good sense of smell and taste, but this deficiency is made up for by vision and hearing.

So, to avoid the excellent smelling power of a grizzly bear in a wild fight, a tiger will have to approach it against the air stream.

Concluding the comparison of senses, I would give an edge to the tiger.

What Are the Battle Tactics of a Tiger and a Grizzly Bear During a Fight?

Despite the low chance of a fight in the wild as they don’t overlap much in each other’s territory, the strategy of each combatant during the fight can provide an idea of who would win.

In the fight, a tiger would have only one strategy: a strong, fast ambush attack to bite the neck and finish the fight as soon as possible.

Otherwise, the cost may be too high, and success may disappear.

On the other hand, the Grizzly seems to be in a defensive posture.

They tend to stand to appear larger than their enemy and try to threaten first.

They try to defend and launch a defensive offense, and the fight is prolonged.

Who Would Win in a Fight Between a Tiger and a Grizzly Bear?

So, who would be victorious in the fight between a grizzly and a tiger?

The answer is “whoever strikes first.”

If a tiger succeeds in launching its powerful bite on the neck, it would definitely win as it is very difficult to get out of the tiger’s jaws.

And if the bear successfully strikes the first blow on the tiger’s spine or legs, the fight has finished.

The more the fight is prolonged, the lower the tiger’s chances of winning get.

In a shorter flight, the tiger wins. In a prolonged encounter, the Grizzly bear wins.