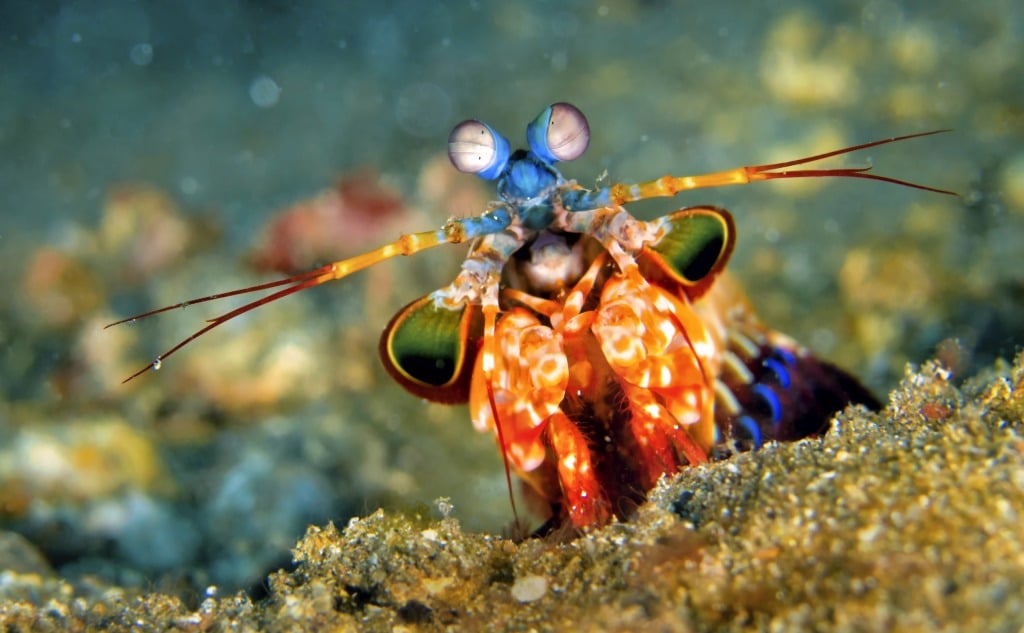 Here’s what a mantis shrimp can do to a human and whether it can hurt them:

A mantis shrimp’s powerful punch can hurt humans. A shrimp can land before a person even realizes it is there because its strike is so quick.

Shrimp punches cause deep wounds and lacerations with rounded edges. There is almost always a loss of tissue after a mantis strike and heavy bleeding.

So if you want to learn all about what a mantis shrimp can do to a human, then this article is for you.

What Can a Mantis Shrimp Do to a Human?

A mantis shrimp can hurt humans with its powerful punch. The shrimp’s strike is so fast that it can land before a person even knows the animal is there.

The shrimp’s punches leave deep wounds and lacerations with rounded shapes. After a mantis strike there is almost always a loss of local tissue along with heavy bleeding.

Fishermen attacked by mantis shrimp say that it hurts terribly to get punched or pierced by them. Fishermen fear mantis shrimp and are very cautious because of the many anecdotal reports of these marine animals injuring humans.

Have There Been Reports of Humans Getting Injured by Mantis Shrimp?

There have been a few reports of people getting into fishing accidents with mantis shrimp. Luckily, none of them were lethal or too serious. However, some people did have to get professional medical help because of the intense pain and the bleeding.

One case was a 50-year-old fisherman that tried to remove the animal from the hook of his fishing rod. The mantis shrimp used its tail to strike the man in the arm, causing pain and bleeding. The mantis shrimp’s tail, however, is actually the thing that causes the least damage.

Two fishermen from Brazil were injured by mantis shrimp they found in their fishing nets.

When trying to get the shrimp out of the nets, the fishermen received stinging strikes from the animals.

One of the fishermen rinsed the wound with soap and water and saw it heal in one week. The other fisherman left the wound unattended and suffered the injury for weeks.

Some people have been injured by accidentally stepping on mantis shrimp. Because the animals camouflage themselves by burrowing into holes, they are quite easy to step on.

Doctors that have treated people attacked by mantis shrimp say that a course of antibiotics and wound-cleaning promote faster healing.

Has a Person Ever Been Killed by a Mantis Shrimp?

No, a person has never been that severely injured by a mantis shrimp to die. Even though mantis shrimp injuries are painful and severe, they have never killed a human.

A human can die if they are allergic to mantis shrimp and suffer anaphylactic shock after eating one. Choking on a mantis shrimp could also be fatal.

What Animal Has the Most Powerful Punch in the Animal Kingdom?

The animal with the most powerful punch in the world is the mantis shrimp.

It generates approximately the same force as a 22-caliber bullet that has just exited a gun barrel.

How Do Mantis Shrimp Hunt?

According to their hunting style, they can be divided into two hunter categories:

Smasher and spearer mantis shrimps aren’t different species of animals. They are just specimens from the same species that prefer two different forms of attack.

As the name indicates, the smashers have blunt clubs on their raptorial arms. The term “raptorial arm” is pretty much the same as the term “predatory arm.” It describes how the forelegs of some arthropods are modified to grasp their victims while they consume them.

Smasher mantis shrimp use the clubs to smash and open crabs, clams, oysters, and other creatures with hard shells.

When they strike, the smashers move their arms at speeds of up to 45 miles per hour (20 meters per second). The mantis shrimp punches with 200 pounds (91 kilograms) of force. Its arms move so fast that they practically tear the water apart.

When punching, mantis shrimp create something called “cavitation.” Cavitation is when watery areas with low pressure are vaporized into bubbles that almost instantly collapse.

The collapse is characterized by a burst of sound, heat, and light. The heat of the punch can reach 8500°F (4700°C). How hot is that, do you ask? Well, it’s approximately 5–10 thousand times hotter than the sun’s surface.

Boat engineers pay a lot of attention to this phenomenon when they are designing boat propellers. Cavitation bubbles have the power to tear holes through metal propellers, as well.

Smashers leave their burrows more frequently than spearer shrimp do. They seek out sedentary prey and settle the beef face to face by smashing their opponent’s armor and exposing the tasty, soft interiors.

Spearers have barbed spears on the end of their arms. They surprise their prey and release the spears surprisingly fast. Even though spearers plenty fast enough to put food on their mantis tables, their attacks are slower than the attacks of smashers.

A fast spearer mantis species can deliver a spear attack at around 13 miles per hour (6 meters per second). Scientists discovered that smaller spearers are faster than larger ones. Still, even the smallest mantis spearer doesn’t come close to the speed of the average smasher.

What both spearers and smashers have in common are their uropods.

Uropods are structures in the tails of mantis shrimps that make their recognizable caudal fans. On each uropod, there is a pair of pointed spikes that the shrimp use as an additional weapon.

The top of a mantis shrimp’s tail is called a telson. Researchers discovered that the shrimps use their telsons to absorb opponent’s strikes and neutralize them, thus protecting itself.

While spearers have a more pointed telson used both for attacking and defending, smashers have a wider one that serves as a shield.

The tip of the tail is made of a helicoid microstructure and is specifically designed to protect one mantis shrimp from another. The telson can take a strike from a 22-caliber bullet. Scientists are discovering ways to use telson-like materials for cars.

The mantis shrimp is neither a shrimp nor a mantis. It is a “stomatopod,” meaning a marine animal with gills on its abdomen. They are a lot more like lobsters than they are like shrimp.

A mantis shrimp is very common and very fascinating at the same time for many reasons. There are more than 400 mantis shrimp species known to science. They vary from the colorful peacock shrimp to the not-so-colorful velcro mantis.

There is a huge variety of mantis-shrimp species. They can be as small as 0.23 inches (6 millimeters) and as long as 15 inches (38 centimeters).

The Mechanism of the Punch

A mantis shrimp contracts its muscles by pulling its arms far back. At the maximum flexion of its muscles, a latch mechanism locks the contracted arm off. When the latch is released, all of the muscle force is released at once.

Delivering a strike as powerful as a 22-caliber bullet takes more than strength, though. Researchers on mantis shrimp anatomy discovered a section on the arm shaped like a saddle. This structure works as a hyperbolic paraboloid.

A hyperbolic paraboloid is an incredibly strong surface when compressed. As a structure, it can be found in jewelry making and architecture. In both these fields, the point is to make more with less material, which is exactly why mantis shrimp have these saddle-like thingies.

The mechanism mantis shrimp use to deliver their strikes makes it possible not only to break through clamshells and crabs but through aquarium glass as well.

These marine animals mostly inhabit subtropical and tropical shallows in the Pacific Ocean. Mantis shrimp spend most of their lives in burrows.

A burrow is a hole or a tunnel the animal digs to hide, sleep, and lay ambush in.

Stomatopods keep their burrows very clean and tidy because they are the type of animal that pays great attention to detail and enjoys being precise and careful. The constant hiding makes it a bit difficult to learn more about these amazing sea creatures.

Mantis shrimp have some of the most complex and developed eyes in the animal kingdom. Their eyes are mounted on mobile stalks that can rotate 70 degrees.

Each eye is built of three separate parts that give the animal trinocular vision. The trinocular vision provides mantis shrimp with the ability to perceive depth far more effectively than humans can.

A human eye perceives the colors of the spectrum thanks to three photoreceptors in the retina of the eyes.

The eyes of mantis shrimp have 12–16 photoreceptors. They can see polarized light and ultraviolet light, as well.

It’s still debatable whether or not mantis shrimp perceive more colors than humans perceive. Even though their eyes are amazingly developed, the information they get is processed on the spot rather than being sent back to the central nervous system as human visual information is.