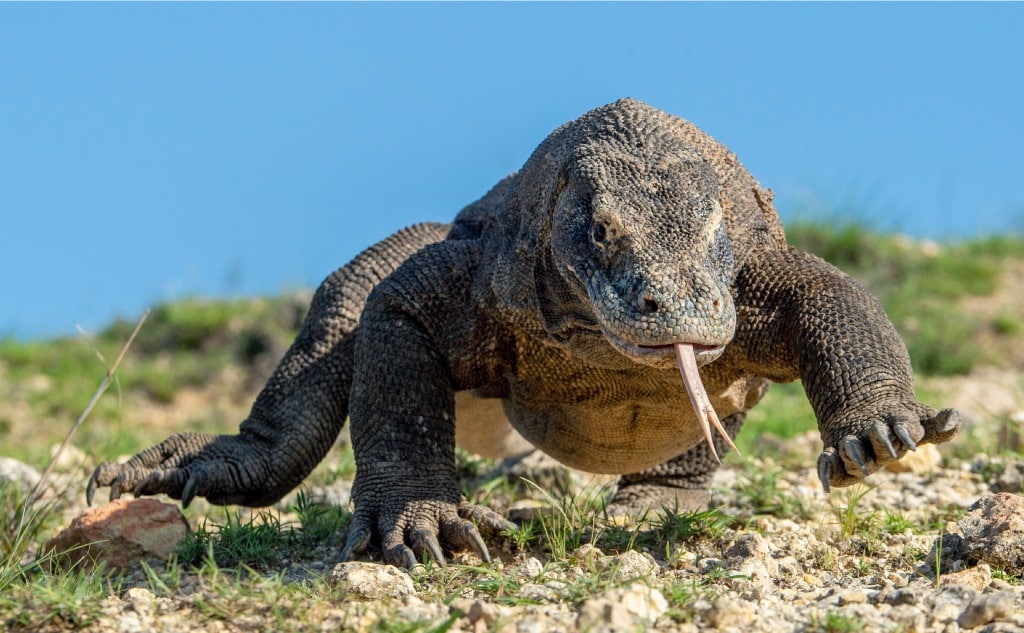 Here’s who wins in a fight between a komodo dragon and a crocodile:

If you want to learn all about why a crododile wins almost in every fight with a Komodo dragon, then you’re in the right place.

Who Wins in a Fight Between a Komodo Dragon and a Saltwater Crocodile?

Crocodiles and Komodo dragons are two of the fiercest predators in the world. It’s fun to imagine them locked in battle.

If a Komodo dragon is foolish enough to enter crocodile territory, it will find itself in a death trap with no possible escape. The Komodo dragon is the same size as the prey that crocodiles are used to eating.

Crocodiles are very fast and unpredictable. They would grab and drown the Komodo dragon before the dragon knew what hit it.

“What about the venomous bite of the Komodo dragon,” you ask? Well, crocodilians, in general, are immune to snake venom, so a dragon bite probably wouldn’t do very much harm, either.

The crocodile’s aggressive immune systems would react very quickly if a Komodo managed to puncture it with a bite, which is highly unlikely to happen, anyway.

The crocodile’s immune cells will discover the harmful bacteria before it does any serious damage to the crocodile.

Do Komodo Dragons and Crocodiles Meet in Nature?

No. Komodo dragons and crocodiles occupy different habitats. They don’t meet in nature.

Can an Animal Escape a Crocodile Attack?

Yes, some animals can and do survive crocodile attacks. It’s been recorded on video multiple times, in fact.

Animals such as buffalos are powerful enough to escape the crocodiles’ attacks. The big cats and constrictor snakes are fast enough to even get the jump on crocodiles and put them at a disadvantage. Elephants are too large for even the mighty crocodile to threaten.

The Komodo dragon doesn’t fully fulfill any of the characteristics to survive the attack. They are neither powerful, fast, or large enough.

Which Is More Dangerous to Humans: Komodo Dragons or Crocodiles?

Every year, about 1000 people are killed and eaten by crocodiles.

Komodo dragons rarely attack humans, though the statistics are surely influenced by the fact that very few people live in their extremely limited habitats.

Between 1974 and 2021, there have been only 24 Komodo dragon attacks on people, five of which were fatal. Crocodiles are a significantly more dangerous to humans.

What Is the Komodo Dragons Hunting Strategy?

The hunting strategy of Komodo Dragons is based on stealth. They will wait for hours until prey crosses their path.

Using a unique way of fighting, the dragons are ferociously efficient killers.

They spring up and knock their victims over with their massive claws. Once the prey is down, the Komodo starts shredding the animal with its serrated teeth, which are similar to shark teeth.

There’s no point in trying to escape. Those victims that manage to flee after getting bitten will die of blood poisoning within 24 hours because the saliva of Komodo dragons has more than 50 strains of bacteria.

Animals that were bitten and died of poisoning will eventually get eaten by a Komodo. The lizards have a strong sense of smell and will track down the dead animal.

What Does a Komodo Dragon Feed On?

Komodo dragons are carnivores, which means they eat meat. A Komodo can eat animals much larger than themselves, such as deer, water buffalo, carrion, and pigs.

They can attack humans, too, and they eat other smaller animals of their own species.

A Komodo dragon can fill its stomach with 80% of its bodyweight in just one feeding.

What Does a Crocodile Feed On?

The saltwater crocodile is a typical opportunistic predator, which means it ambushes its prey. It lurks near the water’s edge, just below the surface, patiently waiting for an opportunity to strike.

In most cases, the victim is an animal that just stops by to have a sip of water.

Crocodiles will eat anything that moves, including monkeys, water buffalos, wild boars, even smaller sharks.

Thrashing their enormous tails, crocodiles explode from the water and bite their victims without a warning. They drag the victims back inside the water and hold them under until they drown.

What Are the Crocodile Physical Attributes?

The saltwater crocodile is the largest reptile on planet Earth. They are massive, and their primordial appearance reminds us of far older times in the world.

The head of a saltwater crocodile is very large and triangularly shaped.

Adult male crocodiles are larger than females and can have a bodyweight of more than 2000 pounds (900 kilograms).

The physical traits of saltwater crocodiles allow them to be very successful predators. They can swim fast because of their streamlined bodies and because of the possibility to decrease water resistance by tucking their feet to the sides while underwater.

Crocodiles’ web-shaped feet don’t’ contribute to increased swimming speed but do give them the ability to make sudden moves and fast turns underwater. These types of feet are an advantage in shallow water where crocodiles sometimes walk.

How Is the Saltwater Crocodile Distribution?

Crocodiles are widely distributed throughout the Indonesian Islands. They’re also found in northern Australia. You can find crocodiles in parts of Eastern India, along the shores of Sri Lanka, central Vietnam, and the Philippines.

During the dry season, crocodiles dwell in estuaries.

Estuaries are tidal mouths of large rivers where the ocean water meets the stream water.

It’s not unusual to come across a saltwater crocodile in the open sea, too.

When the wet season approaches, crocodiles move to freshwater areas and inhabit rivers and swamps.

What Is the Saltwater Crocodile Behavior?

Within the reptile family, the saltwater crocodile is considered to be one of the most sophisticated and intelligent members. They use barking sounds to communicate with each other.

Some crocodilians live in groups, but saltwater crocodiles are solitary. They only allow females to roam their habitats and look out for hatchlings in the first months of their lives.

Aside from these two exceptions, no other living being is allowed to approach them.

Most of their time is spent thermoregulating their body temperatures.

When crocodiles are too hot, they get inside the water and leave their nostrils and eyes out. Once their internal temperatures drop, they bask on flat rocks in the sun until they are warmed up.

What Are the Komodo Dragon Physical Attributes?

Komodo dragons belong to the monitor lizard family and are the largest and heaviest lizards on the planet.

The Komodo dragon is one of the few lizards with a venomous bite. They are the largest animals in their Komodo Island habitat. They are also the only carnivorous animals there.

They are the apex predators of their home.

Komodo dragons come in a variety of colors. They can be blue, orange, gray, or green.

What is special about their durable and rough skin is that it is reinforced with osteoderms.

Osteoderms are bones embedded inside the skin. They are very hard to pierce.

The claws of Komodo dragons are long and large and their tails are very muscular. Their sharp, keen vision gives them the ability to see objects 985 feet (300 meters) away from them.

These lizards can gain a running speed of 13 miles per hour (20 kilometers per hour), but only for short bursts.

Komodo dragons have around 60 teeth that are frequently replaced. The length of a teeth is one inch (2.5 centimeters), which is a lot shorter than the teeth of saltwater crocodiles.

Gingival tissue almost completely surrounds the teeth of Komodo dragons. Their saliva is tinted with blood because the gingival tissue constantly lacerates during feeding.

How Is the Komodo Dragon Distribution?

The Komodo dragon can be found on a few islands in Central Indonesia. Their primary habitat is Komodo Island, but they also live on Rinca, Flores, Gili Montant, and Gili Dasamo. Of all large predators in the world, they have the smallest natural range of distribution.

Komodo dragons can adapt to dry tropical forests, savannas, and monsoon forests. The common denominator is heat—they like it very hot. The islands of Indonesia have temperatures of around 95° Fahrenheit (35° Celsius) and 70% humidity.

What Is the Komodo Dragon Behavior?

This animal is most active during daytime, but it sometimes acts at night.  Komodo Dragons are solitary and only team up to eat or breed.

When they are young, they can climb trees with the help of their strong claws.

While sleeping in their burrows (hole they dug for themselves), the dragons can conserve their body heat so they don’t need to lie in the sun in the morning to get warm.

They use afternoons for hunting and spend the rest of the day hiding from the heat in shaded areas. Sometimes Komodo dragons enter the water to swim.