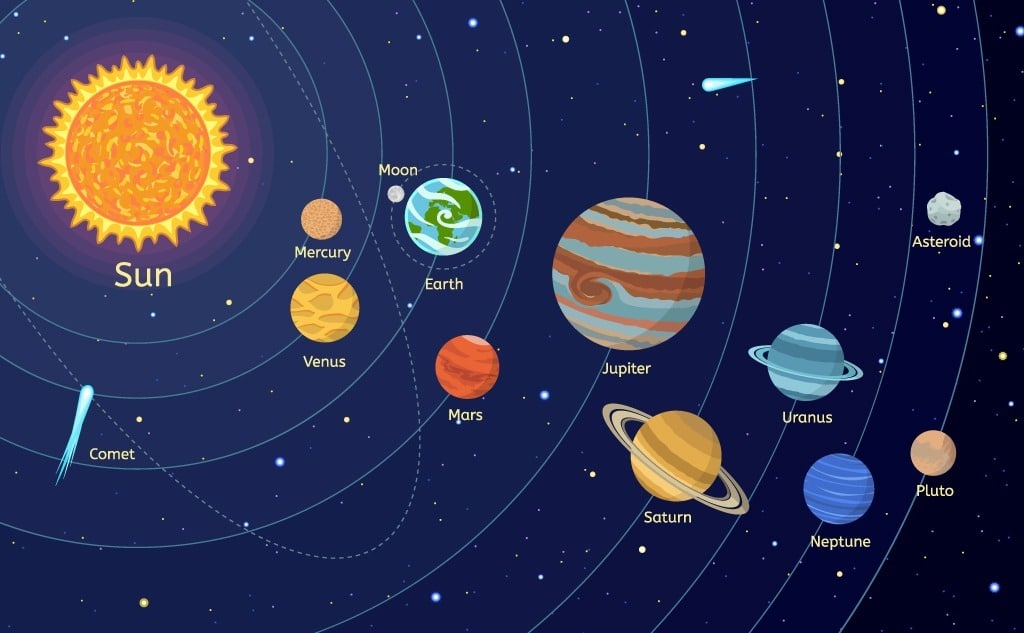 This is about the distances in our Solar System.

So if you want to learn all about the distances in our solar system in simple terms, then you’re in the right place.

Distances in Our Solar System

Equipped with truly magnificent technology, mankind has discovered, explored, and even physically touched some breathtaking sights among our vast cosmos.

In fact, with widely accessible images from Hubble and several successful missions, it sometimes feels as though we’ve “been there, done that.”

However, we’ve barely experienced our own solar system, let alone our Milky Way galaxy or beyond.

Let’s start right at home with our Solar System distances:

Firstly, let’s establish some very basic information, like our speed and units of measurement.

If we define these things and keep them consistent, it will be much easier to understand distances.

Assume that we are traveling in a spacecraft capable of 36,000 mph speeds.

Actually, this really was the record-breaking speed set by New Horizons as it left Earth in 2006.

Granted, many factors can affect speeds in space. Gravity, planets, stars, they all speed us up, or slow us down.

But, forget this and assume we are traveling along at a constant 36,000 mph.

Next, we will take on some truly huge numbers in this article.

However, don’t worry. Zero math is involved. But, we still need something to help our human brains understand these vast distances.

We will use the astronomical unit.

One astronomical unit, or AU, is the average distance between Earth and the Sun.

In other words, 93 million miles.

Using AUs will make it easier to understand distances between planets and other solar system locations.

Make no mistake. Our solar system is home. But, home itself is truly gigantic.

Our journey begins with our solar system’s inner planets, Mercury, Venus, Mars, and our home, Earth.

Simply to arrive at our closest neighbor, Venus, would take almost a full month at 36,000 mph.

Mercury and Mars, both around two months.

However, imagine visiting an out-of-state relative or a national park.

Sitting in the back seat of mom and dad’s station wagon for two months, or over 60 days, would be rather unbelievable, no?

Now, your trip to Venus would require over 550 months or almost 17 thousand days.

Mars would be over a thousand months, 31 thousand days. And, these are just our solar system’s “inner” planets.

Looking up from our backyard to see Venus or Mars using only our naked eye makes them feel close, like neighbors.

We find safety and comfort in the feeling of being in a home. However, once we begin comparing even these “nearby” distances to our own Earth experiences, a new perspective appears.

In fact, visiting our biggest planet, Jupiter, would be a 15-month journey. That’s more than 450 days or nearly 11 thousand hours.

Next up, Saturn at 8 AU from home would take over 30 months, or over 900 days. Now, that station wagon backseat is sounding pretty horrific, huh?

At last, we approach the frozen outer planets, the ice giants. Uranus would take almost 58 months to reach, nearly 2,000 days, or 47 thousand hours.

Finally, let’s visit the former ninth planet, Pluto, at 40 AU from Earth. Sitting in the outskirts of our solar system, Pluto would require nearly 15 years to reach.

In other words, more than 5,300 days, or almost 128-thousand hours. The average human life lasts around 672,000 hours. Therefore, visiting Pluto would require around 20% of a lifetime.

In other words, if you left for Pluto as the Bible was being written, you’d still have 6,000 years left in your trip.

Note: Indeed, New Horizons completed its Pluto trip in just under a decade. However, other factors, like gravity, helped make this possible.

Wait, our journey is not over yet! Indeed, beyond our planets, a doughnut-shaped region exists called the Kuiper Belt.

Containing millions of icy objects, the Kuiper Belt even hosts a dwarf planet, Pluto. But, unlike Pluto, this cosmic ice doughnut is seriously large.

In fact, the Kuiper Belt stars at around 30 AU away from Earth and continues on for another 20 AU. Simply put, the doughnut is 1.8-billion-miles wide.

Put another way. Two full presidential terms would have passed by the time you arrived at the Kuiper Belt.

Unlike the flat Kuiper Belt, think of the Oort Cloud as a gigantic bubble or sphere. Now, this is where our solar system distances become extremely large.

The Oort Cloud begins at around 5,000 AU from home and continues for another 95,000 AU. Think about that for a moment.

In other words, this frozen bubble is almost 9 trillion miles thick. You would have to line up over 3 billion United States to equal its distance. That’s equal to traveling to Pluto and all the way back to Earth over 950 times.

Now, you’d face a 5.6-billion-day trip! Longer than human beings have been on planet Earth. Close to one day for each human being living on Earth right now.

Now you understand just how incredibly large our own home really is.

Indeed, our own solar system spans trillions of miles. So being in complete awe and feeling truly microscopic among the cosmos happens right in our own backyard.

But, best of all, we are all connected and are actually part of these amazing distances.

In another journey, we will break down the size of our home galaxy, the Milky Way.